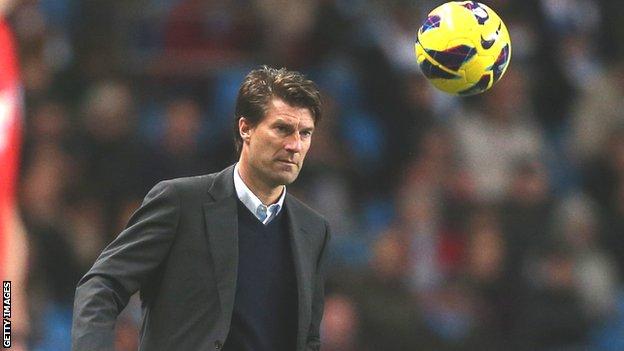 Rush hopes to renew acquaintance with Laudrup on Wednesday after Swansea's Capital One Cup visit to Anfield.

"He'll keep them up without doubt," said Rush. "Swansea did really well last season and they'll stay up because of the football they play.

"I'm looking forward to seeing him. He's a lovely man and a great manager."

Laudrup and Rush played alongside each other and shared rooms during the Welshman's one season at Juventus in 1987-88.

He probably had the most individual skill I've seen

Rush struggled to replicate his trademark scoring prowess in Italy, although he maintains his 14-goal return contradicts the general perception that his time in Serie A was a failure.

He also insists he never uttered the infamous quote attributed to him that he failed to settle in Italy because "it was like living in a foreign country".

But Rush, now a Liverpool ambassador, revealed he will forever be grateful to Laudrup for doing more than anyone else to help him adapt to life in Turin.

"Michael looked after me when I was at Juventus," said Rush, who joined the Italian giants from Liverpool for £3.2m in 1987.

"He could speak very good English and he really looked after me. I'm thankful to him for that."

There was plenty to admire about Laudrup's on-field demeanour too, said Rush, describing the Dane as a player that "probably had the most individual skill I've seen. He was an incredible player".

Rush and Laudrup, who has never played or managed a team at Anfield, came extremely close to being team-mates five years earlier.

Laudrup was set to sign for Liverpool but a late contractual change persuaded him, then 19, to change his mind, paving the way for a move to Italy.

The former Real Madrid and Barcelona playmaker has made an encouraging start since a summer move to Swansea, taking them to a comfortable mid-table position after nine games.

He has built on the foundations and philosophy developed by Brendan Rodgers, whose impressive debut Premier League season with Swansea put him on Liverpool's radar.

Rodgers will face his former employers for the first time on Wednesday in a League Cup fourth-round clash, and Rush, admitting the Reds are stuttering under the new manager, feels the tie could go either way.

"Both teams will want to play football and that's the good thing about it," said Rush, Wales' all-time leading scorer with 28 goals.

"Stoke City tried to bully Liverpool out of it the other week and got a result. But I'm sure Swansea will try to play football.

"On the day, whoever plays the best football will win. Whoever wins this has a chance of going all the way.

"Liverpool have the advantage because they're at home, but they'll have to make the most of that."