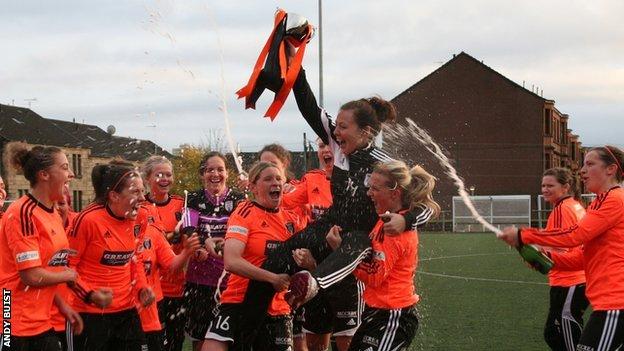 City scored 11 second-half goals as they defeated the Dons 12-0.

"In the second half we gave a real Championship winning performance and it is a real credit to the players that they performed like that," said City head coach Eddie Wolecki Black.

"The season is not over, however, and we are still focused on our last league match and of course the Scottish Cup final where we will be going all out to win the treble."

Celtic and Hibernian, who are level on 42 points as they vie for second place, both won, defeating Forfar Farmington 3-2 and Spartans 3-1 respectively.

Rangers defeated Kilmarnock 10-0 in Ayrshire, while Hamilton recorded an 8-1 victory at Inverness.

Hutchison Vale beat Falkirk 5-1 in the weekend's other fixture.