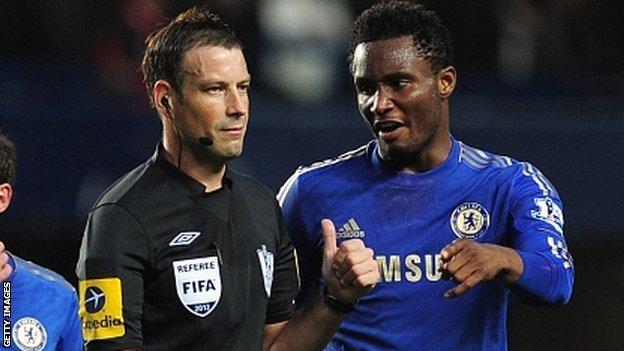 Chelsea have made a formal complaint against referee Mark Clattenburg after accusing him of using "inappropriate language" towards two of their players in the 3-2 defeat by Manchester United.

Part of the allegation is that Clattenburg used racial language, BBC Sport has learned.

It is also understood midfielder John Mikel Obi is involved in the complaint.

"We have lodged a complaint to the Premier League match delegate," said a Chelsea spokesman.

"The match delegate will pass the complaint to the Football Association."

Referees' organisation Professional Game Match Officials (PGMO) later issued a statement which read: "PGMO is aware of the allegations and they are being treated with the utmost seriousness.

"Mark will co-operate fully and welcomes the opportunity for the facts to be established."

All four officials - the referee, his two assistants and the fourth official - wear microphones and ear pieces that allow them to hear what each other is saying throughout the match, although it is not recorded.

The news that Chelsea made the complaint rounded off a dramatic day which saw the Blues lose their unbeaten Premier League record after Javier Hernandez struck a controversial winner 15 minutes from time.

Chelsea's Branislav Ivanovic and Fernando Torres were shown red cards in the space of five minutes, with the latter's second yellow card for diving disputed by Chelsea.

Torres was sent off in the 68th minute after falling under a challenge from defender Jonny Evans.

"It is a shame a game like this had to be decided in that manner by officials," said Chelsea manager Roberto Di Matteo.

"Surely when the referee watches it he will realise he has made big mistakes."

Durham-based Clattenburg, 37, is viewed by the PGMO as one of the country's leading officials.

In 2009, he was suspended over allegations about his business dealings but Clattenburg appealed and returned to officiating after an eight-month ban.

Meanwhile, Chelsea will investigate reports that a steward was injured by objects thrown from the crowd at Stamford Bridge.

Hernandez appeared to be pelted as he celebrated scoring United's winner in front of Chelsea fans in the Matthew Harding Stand.

A steward required 10 minutes of treatment before being taken to hospital.