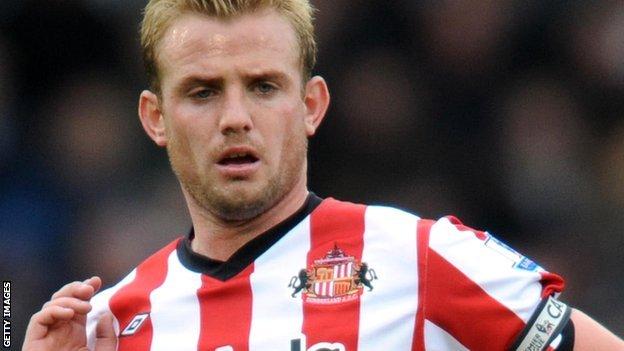 Sunderland captain Lee Cattermole has signed a new contract which will keep him at the club until 2016.

The midfielder, 24, who was out of contract at the end of the season, joined from Wigan in 2009 on a four-year deal and has made 72 appearances.

He said: "I'm absolutely delighted. The gaffer made it clear to me at the end of the season that he wanted to keep me at the club.

"It took a bit of time but I'm glad it's been sorted in the end."

He added: "If you look at our signings in the summer I think you can see that we have made some big signings and I think it's the best place for me at the minute."

Cattermole began his career at Middlesbrough aged 17, playing in the Uefa Cup Final in 2006 when Boro lost 4-0 to Sevilla.

He joined Wigan in 2008 but left for Sunderland after one season.

The former England Under-21 international has struggled with injuries since joining the Black Cats but has averaged 24 appearances a season.

He returned to the side in Sunderland's 0-0 draw with Stoke at the weekend, having served a three-match ban.

He was sent off against MK Dons in the Capital One Cup earlier this season - the seventh dismissal of his career.