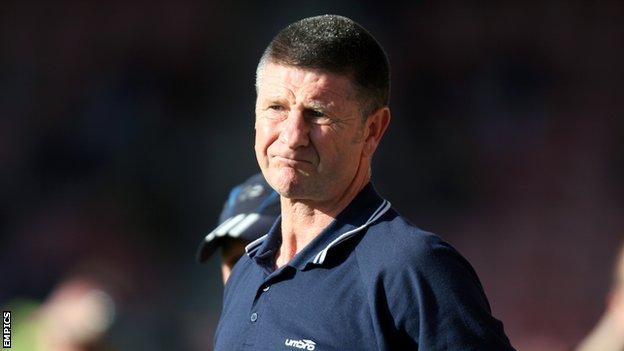 The club are currently struggling to arrange a payment plan with HM Revenue & Customs over a £120,000 debt.

"I've had a very constructive meeting with Gary Peters and we have mutually agreed that the position is no longer required within the club," Keyte said in a statement to the club website.

The members of the Board of Directors would like to place on record our thanks for the unstinting effort that Gary [Peters] put into his work over the past year.

"I would like to stress that this decision is in no way a reflection on Gary's performance whilst at the club. His experience of the game is enormous and he has contributed fully to discussions on every subject."

Hereford, who drew 2-2 with Southport on Saturday, have been struggling financially since their relegation from the Football League last season.

Chairman Keyte said the club were losing money at the rate of £8,000 per week due to the loss of revenue following relegation, and that they face the serious possibility of administration if they did not receive the further investment needed to continue operating and pay off their existing debt.

Keyte also revealed following Saturday's game that the players were not paid on time last week, but has given assurances that they would receive their wages by 31 October.

However, the club's financial difficulties mean that they need to find ways of saving money, and former Shrewsbury boss Peters, who only moved to Edgar Street last October, has become a casualty of these measures.

"Gary has done a lot of good work towards reducing the excessive running costs of the football department with particular reference to contracts and accommodation of players," Keyte said.

"It was clear that a lack of experience within the football club was evident on his arrival and we have benefited from Gary's experience and guidance. He leaves the club in a better state than when he arrived.

"The members of the Board of Directors would like to place on record our thanks for the unstinting effort that Gary put into his work over the past year and we wish him and his wife Jill every success in the future."