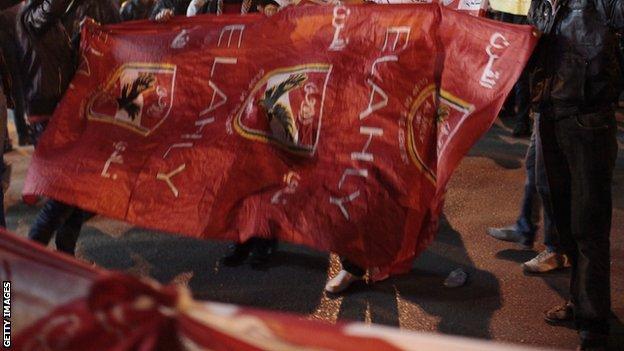 The fanatical supporters of Egyptian side Al Ahly, the 'ultras', say they will not be attending the first leg of the African Champions League final.

Last week Egypt's Ministry of Interior had agreed to allow around 20,000 fans to watch the game in Alexandria on 4 November against defending champions Esperance of Tunisia.

But Ultras Ahly said on their Facebook page that they will not return to watch their team until they feel justice has been served with respect to the fans that died in Port Said in February.

Ahly fans were among the more than 70 supporters that lost their lives during violent clashes as their team played Al Masry.

"Nine months have passed and we are still waiting for a verdict," the statement said.

"Therefore we announce that neither Ultras Ahlawy or Ultras Devils will be present at the African Final or any other match before claiming the rights of our colleagues."

The match is set to take place at the 90,000 seat Borg El Arab Stadium and is only the second game in Egypt that fans have been allowed in to see since February's tragedy.

There has been no league football in Egypt since the deaths and it has now been postponed indefinitely after several dates were proposed but then changed due to continued security concerns.