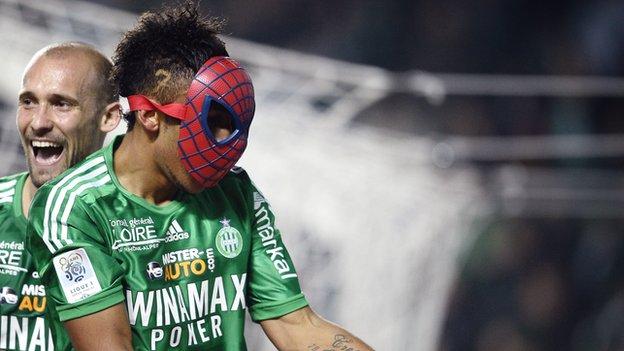 Gabon's Pierre Aubameyang scored his sixth Ligue 1 goal at the weekend as he gave Saint Etienne the lead in the 21st minute in their 2-0 win over Rennes. He celebrated in bizarre fashion by donning a Spiderman mask.

Cameroon defender Gaetan Bong Songo was less fortunate as he scored an own goal after just two minutes as Lille beat his Valenciennes side 2-1.

Champions Montpellier won their first game in three thanks to a 3-1 home win over Nice. Senegal striker Souleymane Camara broke the deadlock in the 53rd minute and Nigeria's John Utaka scored the second 11 minutes later.

Fabien Camus equalised for struggling Troyes in the 64th minute to help his side grab a point in a 1-1 draw with Reims. It was the Tunisia midfielder's first goal in the League.

Levante won their third straight game and climbed up to fifth place after beating Granada 3-1 with Nigeria's Obafemi Martins scoring twice. The striker struck in each half to take his tally to four goals in five games for the Spanish side he joined last month. Morocco striker Youssef El-Arabi pulled a goal back for Granada with five minutes remaining.

Guangzhou Evergreen retained their Super League title over the weekend with a game to spare as they Liaoning Whowin 1-0 to stay five point clears off their nearest pursuers Jiansu Sainty. Unfortunately there are no Africans in squad to celebrate the title - and just one scorer from the continent on the penultimate weekend of action.

Nigeria striker Yakubu Ayegbeni grabbed that goal for Guangzhou R&F but it was not enough as they lost 3-2 at Qingdao Jonoon.

Ivory Coast's Didier Drogba did not play for Shanghai Shenhua as they drew 0-0 with Dalian Aerbin. But the striker's arrival from Chelsea has helped his side to 11th in the table and means they avoid relegation, even if they lose their final league game this coming weekend

Not the case for Zambia captain Christopher Katongo as his Henan Jianye have been relegated to play in China's League One next season. Katongo's side lost 1-0 at the weekend and rooted to the bottom of the table.

Cisse did not know too much about his first league goal of the season as the ball deflected in off his back from a shot by Sammy Ameobi.

Cameroon defender Stephane Mbia was sent off for QPR as they lost 1-0 to Arsenal, whose Ivory Coast striker Gervinho left the pitch with an ankle injury.

Ghana midfielder Nana Asare scored the only goal of the game to give his side Utrecht all three points over Groningen. Asare has now scored twice in nine games for Utrecht.

Nigeria striker Uche Nwofor was on target for VVV Venlo in the 31st minute but his side still lost 4-1 in a home game against NAC Breda. Nwofor has scored three goals in nine games for Venlo who are yet to win a game in the Eredivisie and lie at the bottom of the table.

Another Nigerian Imoh Ezekiel netted his fifth goal in the league to help Standard Liege to a 2-1 win over Cercle Bruges in the big game of the weekend.

Burundian striker Mohamed Tchite fired home twice for Club Bruges who were shocked 3-2 by visiting side Lokeren. Tunisia's Hamdi Harbaoui and the South Africa midfielder Ayanda Patosi were on target for Lokeren.

An explosive final 10 minutes saw Arsenal Kyiv and visiting Volyn drawing 1-1 with Africans scoring both goals. Ghana striker Dominic Adiyiah was first to find the back of the net in the 81st minute for Kyiv before Nigeria's Abayomi Seun equalised for Volyn five minutes later.

Dnipro Dnipropetrovsk climbed to second position after their 2-0 victory over Karpaty. Nigeria's Michael Odibe scored his first of the season as he scored his side's second of the match to ensure the three points.

Senegal striker Mame Biram Diouf scored the second goal for Hannover 96 and gave them a 2-0 lead in the opening minutes of the second-half. However his side then slumped in the last 20 minutes as visitors Borussia Monchengladbach rallied to win 3-2.

The battle of the Vitoria's ended in favour of Guimaraes who beat Setubal 2-1 with both sides finishing the game with ten men. Cameroon striker Albert Meyong scored from the penalty spot to equalise for Setubal in the 65th minute to take his tally to four in the league. While on the stroke of half-time Algeria midfielder El-Arbi Soudani of Vitoria Guimaraes was sent-off.

Anzhi Makhachkala dropped to second position after losing 2-1 to Rubin Kazan. Ivory Coast's Lacina Traore scored for the second consecutive weekend as he took his tally to seven goals.

Elazigspor's Senegal striker Diomansy Kamara scored his sixth goal of the league in the 1-1 draw with Eskisehirspor.