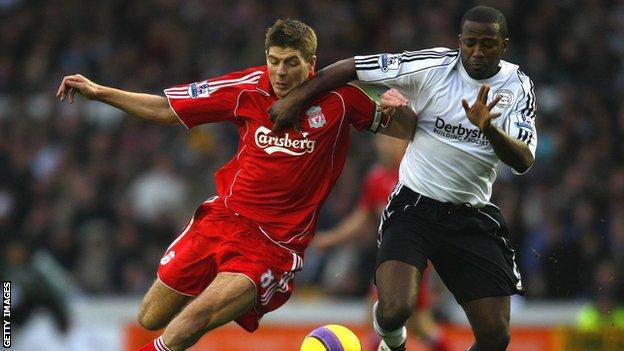 First it was players. Now referees are under investigation regarding alleged racist comments. You might be forgiven for wondering where it might end.

Amid the maelstrom, there is a danger that the wider picture has been lost too.

If you speak to black players and coaches from grassroots level to the top flight, it is clear that one of the biggest issues is lack of representation at management level.

The 39-year-old, who is now coaching at Birmingham, began to take his badges while he was playing. When he hung up his boots in 2009 he spent two years guiding the youth team with some distinction, complete with a Uefa Pro Licence - the highest coaching qualification.

Then the first-team manager, Paul Ince, lost his job and was replaced by Martin Allen. Johnson was told that a new team would be brought in and his services would no longer be required. Fair enough, he thought, this is how football sometimes works.

Johnson told BBC Sport: "I had to accept that decision and I left, only to find to my horror that an under-12s coach who only had a Uefa B Licence moved into my position of youth team manager and I was out of work.

"You look back at the job you've done and the facts. There were youth-team players going into the professional environment, so you've ticked that box. The youth team was successful in the league and the cup, so that box is ticked too, but you carry on looking for a reason as to why you were released.

"I don't know Martin Allen and he doesn't know me so there is no judgement on personalities. The chance wasn't given for me to show him or to prove myself to him; I was just told I wasn't wanted as part of his team going forward."

Allen told BBC Sport that decisions about Notts County's youth team management were not part of his remit when he took over and the call to release Johnson was made by someone else. Notts County declined to comment.

Since then, Johnson estimates that he has applied for between 25 and 30 coaching roles and has had three interviews. One of those was a non-league role, another as an academy manager.

What links this all is a lack of opportunity.

Johnson, who worked under Keith Alexander and Ince at Notts County, added: "I wouldn't say football clubs are racist; there is a fear of whether black managers are good enough.

"I don't believe black British managers get the opportunities and I think there is a lot of ignorance flying around.

"I'm not saying the colour of your skin or where you are from is preventing you from getting a job. All you want is a level playing field.

"If I was in any working environment and there was a position that became available and I had the qualifications, I'd like to think that I would at least get an interview based on what I had done and the qualifications merited it. But in my case that hasn't happened."

Johnson is not alone in wanting this chance. Many black managers and coaches share similar concerns and do not have confidence in the system, according to the Professional Footballers' Association's Paul Davis. But Johnson is one of a handful who are willing to talk about it.

Most want a similar thing: the introduction of a so-called 'Rooney rule'. It is not about quotas; it is not positive discrimination.

It is a "positive action", as the PFA's Brendon Batson calls it. The chance for a qualified candidate to get an interview and then be left to demonstrate their prowess in front of people they might not otherwise have met.

Johnson, who made more than 400 appearances as a professional, wishes he did not have to speak about the issue and accepts that doing so might label him as a trouble-maker. That is why others are not so vocal, he says.

But he argues that moving forward in a united manner is the only way of bringing about change and he believes that more black and ethnic minority managers will "inspire youngsters to further their knowledge of the game".

He added: "We aren't here to call anybody names. We aren't here to slaughter any organisation or individuals. What I am here to say is 'how can we improve the situation?' We feel that certain things are preventing us from achieving, so how can we do it together?

"I want the Rooney rule as soon as possible. I want my eight-year-old son to be able to play football and if he wants to go into coaching he can achieve whatever he wants without the fear he is up against any obstacles.

"I have to keep with this because I'm an elder statesman in the game now and I know a lot of youngsters from an ethnic background that know I've got my Pro Licence and are watching my career path to see if it is something they can aspire to.

"I don't want to turn around to them and say you are wasting your time."