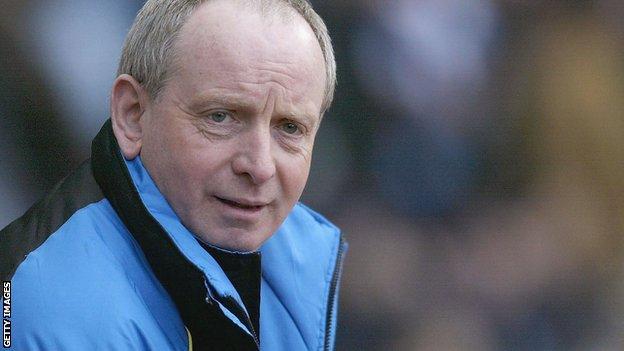 Crystal Palace's caretaker manager Lennie Lawrence is not interested in filling the role on a permanent basis.

The 64-year-old, who could follow former boss Dougie Freedman to Bolton, was in charge as Palace inflicted Leicester's first home defeat of the season on Saturday.

"I have a loyalty to Dougie. I will not be applying for the job," he said.

"There has been interest from Bolton but I'm here and will do this job to the best of my ability."

Lawrence, who has previously managed six league clubs and worked as director of football at Bristol Rovers and Hereford, arrived at Selhurst Park as assistant boss in January 2011.

And although he distanced himself from the position, he was quick to highlight the opportunity at Selhurst Park with the Eagles on a 10-game unbeaten run this season, which has seen them move up to fourth in the table.

"Whoever gets it has a golden chance. There's something very special here.

"It's unusual that you get the opportunity to take on a group of players that is so together and riding here in the top four," he said.

"Whoever takes charge will have a side that has every chance of maintaining a play-off challenge.

"They are so good as a unit, they could probably run themselves for a week or two."

Meanwhile, Palace co-chairman Steve Parish has said that the club have had lots of interest in the vacant position.

"The phone hasn't stopped ringing," he told the Croydon Advertiser.

"We need to think about what is right and what sort of profile manager we want to bring in."

Parish also said that he hoped to contact Steve Coppell, who was touted as an early front runner for the vacant manager's position.

The former Manchester United player, who is currently director of football at Crawley, has managed the Eagles on four separate occasions and led them to promotion to the First Division in 1989 and the FA Cup final the following year.

"He is in a job at the moment but he has such a history with the club, we will look to have a chat with him," the Eagles co-chairman said.