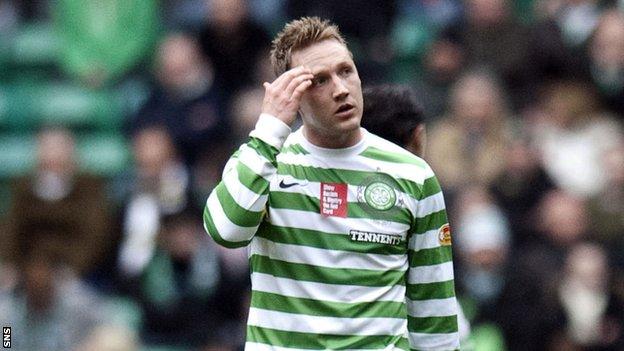 Kris Commons says Celtic must improve their attitude following the defeat by Kilmarnock.

The 2-0 loss was in sharp contrast to an impressive display in the Champions League against Barcelona.

"It was too slow, we weren't playing at a good tempo and we never closed them down as a team," Commons said. "We looked like lost boys as individuals."

And Commons said the side would need to raise their performance following the poor showing at the weekend.

"I know a few came into the side: myself, James Forrest, Beram Kayal, Miku and Adam Matthews," he said following Kilmarnock's first win at Celtic Park since 1955.

"But we've been playing together for years now so it should just click together. Once one goes in, one goes out, and it should slide in nicely but we looked like a lost team.

"The manager was bitterly disappointed and he obviously wasn't happy with the performance or our work rate.

"There was no desire to win the match and we as players demand a performance that's acceptable, but obviously everyone was unacceptable against Kilmarnock.

"Our attitude wasn't right from the start and it's hard to put into words why," he said.

"I think playing for a club like Celtic you have need to get some middle ground of wha's required in a game, whether it's Camp Nou or in the SPL."