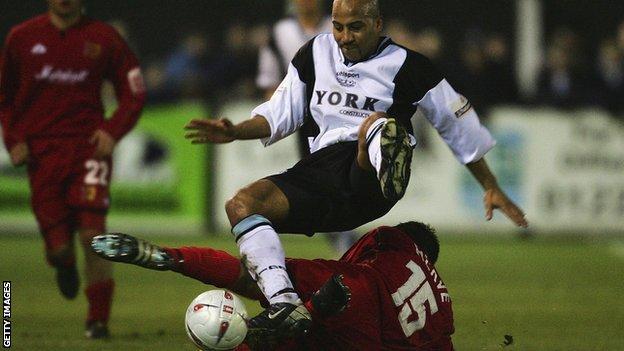 When Cambridge City last played MK Dons, their supporters had little idea they were a club on the "edge of oblivion".

Eight years ago the Dons travelled to Cambridge for an FA Cup second-round encounter against a side still on a high after winning promotion to the Conference South and on their greatest ever run in the competition.

On the surface, everything in City's garden seemed rosy - even though the visitors ran out 1-0 winners.

But, behind the scenes, the roots were starting to rot and so began a deterioration that took the Lilywhites to the edge of extinction and back again to the present day - poetically and coincidentally to an FA Cup first-round game against MK Dons.

"We didn't know at the time but behind the scenes, even though they were doing well on the pitch, off the pitch things were totally falling apart," supporter and former director Rab Crangle told BBC East Sport.

The club's Milton Road home had been sold to developers a year earlier and, even more alarmingly, the possibility of selling their soul to city rivals United was looming large.

"About 18 months after the MK Dons game the directors decided the club had no future and we should try to engineer a merger with Cambridge United," said Crangle.

"When the fans found out about this they were up in arms. A trust was formed - all but one of the existing directors resigned and supporters' trust representatives became members of the board and managed to keep the club going."

The one director who remained - Kevin Satchell - is now chairman.

"There was a feel good factor because of what was going on on the pitch," Satchell recalls, looking back to the day MK came to town in December 2004 and Allan Smart's fourth-minute header put the Football League side through.

The second-round tie between Cambridge City and MK Dons (pictured) in December 2004 is the furthest City have gone in the competition.

Allan Smart's fourth-minute header was enough to edge the Dons through.

"It was hoped a solution could be found off the pitch, for a relocation or a long-term groundshare. We hoped something might fall into place, but we couldn't come up with anything.

"The club would almost have become an academy side for Cambridge United had the plans gone through."

The sale of Milton Road - or the Pro-Edge Stadium as sponsorship dictates it should be called - saw City facing the prospect of homelessness, but supporters had seen enough.

A call to arms was answered and the fans instigated a revolution, taking over the boardroom.

A High Court battle ensued, in which it was judged Cambridge had fallen foul of "fraudulent misrepresentation" by a representative for developer Ross River.

The Lilywhites were given a stay of execution - and the promise of a sum of money when the land is eventually developed.

"We took the club's destiny into its own hands," said Crangle. "The previous board wanted to put it out of existence. If that had happened some other team would be getting the attention we're getting right now.

"This game - with the first round of the FA Cup opening at the Pro-Edge Stadium - is reward for having turned it around and those dark days in 2006 when we were on the edge of oblivion.

"The decline has been arrested. The club is stable. I'm pretty confident the club has a very bright future ahead of it.

"Regardless of the result it will be a great occasion for the club. If it is the last game at Milton Road it would be a great send off, but with a bit of luck maybe it won't be the last one either."

Who gets to be City?

Cambridge City were originally formed as Cambridge Town, while Cambridge United, who have enjoyed success in the Football League in the past, were known as Abbey United.

When Cambridge was granted city status in 1951, both clubs applied for the name Cambridge City, with Town winning by virtue of their application reaching the Cambridgeshire FA first.

This season is supposed to be the Southern League club's last at the ground, which sits next to office blocks and buildings packed with researchers and computer programmers.

As things stand the plan is to groundshare with Newmarket Town, where training stables and gallop tracks will provide the surroundings, until a new community stadium in the nearby village of Sawston gets the go ahead.

But until then, there is one last opportunity for the Lilywhites to script a moment to cherish, while remembering how close they came to dropping off the football map.

"There have been times in the last eight years where it has been extremely stressful," Satchell admits.

"The court case was the ultimate example of that - and we were locked out of the ground at one point.

"But there's been some good times and this Cup game - while being very stressful - is what every club wants.

"The club is still alive and kicking. If we hadn't done what we did, we wouldn't be having this game now.

"We must have achieved something to be playing in the first round of the FA Cup on Friday."