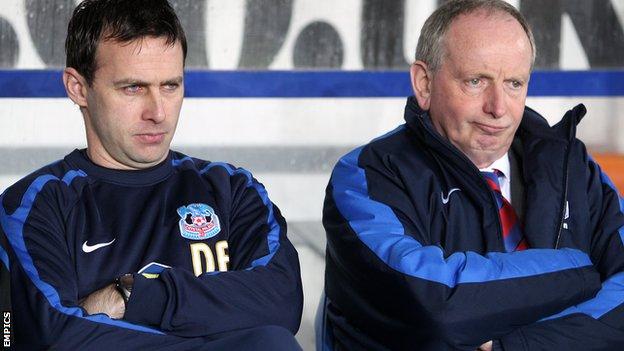 New manager Dougie Freedman has revealed that Bolton's approaches for Lennie Lawrence and Curtis Fleming have been rejected by Crystal Palace.

The pair worked under Freedman at Palace and the Scot still hopes they will follow him to the Reebok Stadium.

"In Lennie and Curtis's situation, they [Palace] feel that, right now, it's not the right time to let them talk to us," Freedman told BBC Radio Manchester.

"We've made the call and it's been rejected. We'll just watch this space."

He added: "There's been discussions but I want to do it the correct way and the professional way."

I understand why certain people would look at it and scratch their heads, but I like a challenge and I like something that excites me

Former Charlton manager Lawrence, 64, has already stated he is on a full-time basis because of his "loyalty to Dougie".

While he and Fleming were leading on Saturday, the new Wanderers boss was watching his new club - a result that saw Bolton drop to 18th in the Championship.

But the former Scotland international striker is sure he has made the currently fourth in the table, for one languishing in the lower reaches of the division.

"Traditionally they're a big club, they've got a wonderful squad and a chairman [Phil Gartside] that made me feel wanted," added Freedman.

"They've got all the tools to succeed and I felt I owed it to my family and to myself to grab that opportunity.

"I understand why certain people would look at it and scratch their heads, but I like a challenge and I like something that excites me.

"When I met the chairman, he sold it to me and made me feel really wanted.

"I know this division and I know that two or three wins will put you right back in there, so I wasn't fooled by the position that the two clubs were in.

"I looked at the bigger picture and a picture that I could possibly change around."

Freedman's first match in charge of Bolton is against Championship leaders Cardiff at the Reebok Stadium on Saturday.