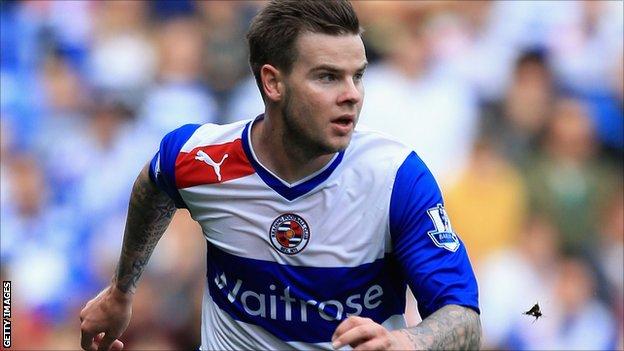 Reading boss Brian McDermott has denied reports of a training ground rift with midfielder Danny Guthrie, but has urged him to buy into the club ethos.

Guthrie was left out of the squad for the 3-3 draw with Fulham on Saturday and reports suggest he reacted angrily and did not attend the game.

"There was no bust-up. Danny wasn't selected to play," said McDermott.

"Danny has been here for a short period of time and he needs to fit into our ways."

He has to train really well, get himself in the team and the squad and we'll go from there

Reading play Arsenal in the Capital One Cup on Tuesday, and McDermott has urged the 25-year-old to win back his place in the squad.

"He has to train really well, get himself in the team and the squad and we'll go from there," added McDermott, who confirmed Guthrie - a free transfer signing from Newcastle in June - was not at the game on Saturday.

"I don't know where these reports have come from; he was training yesterday (Sunday).

"That has to happen; that has been happening over a long period of time.

"I don't know if he was moaning and who to. You'd have to tell me."

Guthrie was forced to apologise to McDermott earlier this month for comments he made on Twitter after he did not feature against Newcastle.