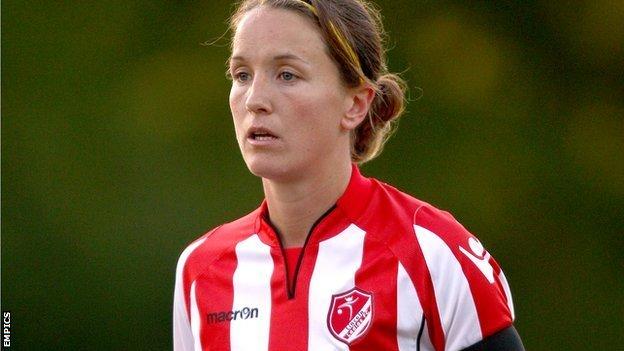 The centre-half, who also skippered the Great Britain side that reached the quarter-finals of the 2012 London Olympics, had been out of contract.

"This club has set itself big ambitions and I hope to help them achieve them," said 30-year-old Stoney.

She added: "I am really happy to have signed a new deal with Lincoln. The vision of this club is fantastic and I am excited to be a part of it."

Stoney joined Lincoln from Chelsea Ladies prior to the first Women's Super League season and has helped the Lady Imps finish fourth in 2011 and fifth in 2012.

"Casey is a fantastic captain and has shown that at international level and by captaining the Great Britain team at London 2012," said Lincoln chief executive Luke Negus-Hill.

"Securing the services of Casey for a further two years shows the ambition of this club to progress and ultimately win silverware, in the not too distant future."

The 20-year-old was born in Grantham, Lincolnshire but has been at the University of Georgia in the United States.

Negus-Hill added: "Ashley is not only an exciting prospect, but can offer a lot to the team now."

Earlier this month, fellow England internationals Sophie Bradley and Jess Clarke signed one-year contracts with the Lady Imps, with an option for a further year.