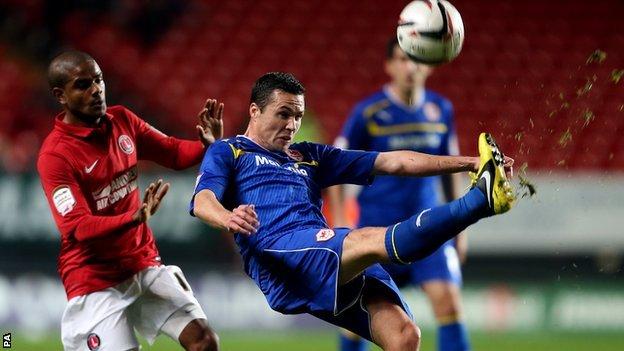 Charlton staged a remarkable comeback to stun Cardiff City in a nine-goal thriller at The Valley.

Cardiff were in control after 24 minutes through Heidar Helguson's header and a Joe Mason tap-in.

But the game turned on its head when Johnnie Jackson scored twice to level before Charlton took control of the game in the second half.

Dale Stephens, Danny Haynes and Rob Hulse made it 5-2 before Craig Noone and Aron Gunnarsson scored for Cardiff.

Defensive errors proved costly for Cardiff, who slip to third in the Championship following another disappointing away result.

Things had started brightly for Malky Mackay's side and Noone had already forced a fingertip save from Ben Hamer before they took the lead from the resultant corner.

Andrew Taylor's inswinging corner found the unmarked Helguson at the near post, and he flicked on past the keeper for his sixth goal of the season.

The visitors were fully in control and continued to press forward after going ahead and the impressive Noone blazed an effort over the crossbar.

Cardiff added a second when Ben Turner's header from a Peter Whittingham corner struck the crossbar and Mason netted from close range.

Charlton had created few chances up until then but they reduced the deficit with six minutes of the half remaining.

Morrison's cross was spilled by David Marshall and captain Jackson rifled into the top corner for his third of the season.

Chris Powell's side finished the half strongly and Turner was forced to clear Hulse's header off the line for a corner.

And from the corner Jackson rose unchallenged to nod the ball in from six yards to level the scores.

Cardiff started the second half brightly and Whittingham's drive was deflected wide for a corner, from which the midfielder hit the top of the crossbar.

But the home side struck again nine minutes after the break when Stephens's 40-yard free-kick from the left hand side flew over the head of Marshall.

Four minutes later Haynes, one of two changes to Charlton's side, headed home from close range to make it 4-2.

Charlton's third goal in the space of 11 minutes came when Hulse rose unmarked to nod home from Salim Kerkar's cross.

Cardiff failed to create any chances of note in the final 25 minutes but rallied as the game entered six minutes of added time.

Noone rounded Hamer to score for the third game running and then four minutes into added time substitute Gunnarsson netted to set up a thrilling finale.

And Noone came close to snatching a dramatic point in the dying seconds but his effort flew just over as Cardiff fell to their fifth away defeat of the season.

Cardiff City manager Malky Mackay said: "To give away five goals is unforgivable. We're 2-0 up and playing really well, we make a mistake before half-time and they get their tails up and get into it.

"In the second half [they] do the same again and then we're really backs to the wall and turn it around and nearly got a draw at the end.

"It was strange evening but it was one that too many people had an off-night and when that happens then you can be punished and we were."