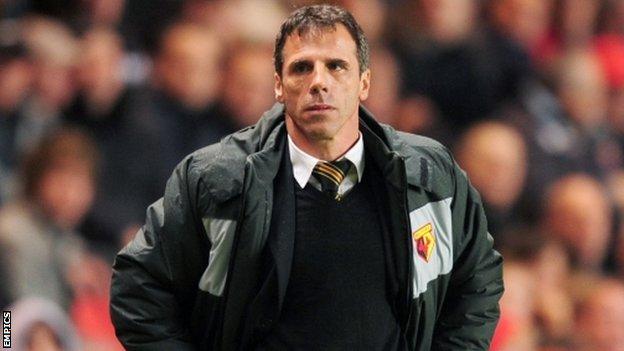 Watford almost snatched victory at the very end of a drab game with Millwall when Almen Abdi rattled the crossbar.

Both teams had first-half chances, with the Hornets seeing Fernando Forestieri's inventive chip headed off the line by Mark Beevers.

Troy Deeney fired narrowly wide for Watford after the break but their chances dried up until Abdi hit the bar with another chip in the dying moments.

Watford will feel they could have won it late on, with Daniel Pudil also narrowly off target in injury time.

But Millwall had the better of the first-half chances and, before Trotter's effort skimmed the woodwork, Chris Wood had a goalbound effort blocked with Mark Beevers heading over from the resulting corner.

The Lions created a lot less in the second half, with both sides seemingly more worried about conceding than breaking the deadlock themselves.

The point leaves both sides on 20 points, four points off the Championship play-offs and eight points above the relegation zone.

Watford manager Gianfranco Zola: "I think it wasn't our best game in terms of quality, especially in the first half.

"In the second half we tried a bit to up the tempo but it's fair to say Millwall came over here and they played a good game, they defended very well and made it difficult for us. So sometimes you have to accept that.

"They haven't lost in the last eight games so that tells you a lot about their solidity and a good moment for this team."

Millwall boss Kenny Jackett: "The quality perhaps of our attacking play wasn't quite there tonight, the crispness of our passing.

"We didn't make the most of situations but on the other hand we ground out a very good draw against a side that give you problems.

"They're very comfortable on the ball, they can move it from one side of the pitch to the other and we also during the course of the second half come through losing two key players who have been very instrumental for us this season in Darius Henderson and James Henry.

"We wobbled for a few minutes and then came strong again and finished the game well. It was a good effort from the players."