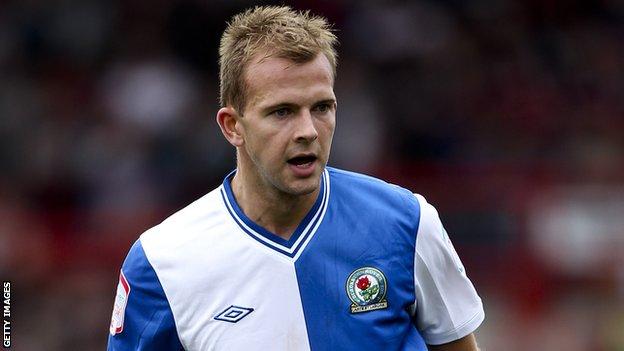 Jordan Rhodes scored on his return to Huddersfield but Blackburn were denied victory by an injury-time equaliser.

Lee Novak stabbed home an opener for the hosts before Rhodes, who left the Terriers in August, beat the offside trap to equalise before the break.

Jordan Rhodes scored 40 goals in all competitions while at Huddersfield last season. He has six in 11 games for Blackburn.

But Novak earned Huddersfield a point deep into injury time, converting from Adam Clayton's ball into the box.

Much of the focus in the build-up to the game was unsurprisingly focussed on Rhodes, who was playing against his former side for the first time since his £8m move.

However, it was his former strike partner Novak who opened the scoring in the 15th minute.

It looked as though Huddersfield would take the one-goal lead into the break, but Ruben Rochina's ball over the top allowed Rhodes to beat the offside trap before he shot beyond Smithies.

Blackburn then went ahead 10 minutes into the second half when Huddersfield defender Joel Lynch brought down Marcus Olsson inside the area and Murphy duly despatched the penalty.

Huddersfield pressed for an equaliser after that but it seemed as though they had run out of time, before Novak slid in an equaliser four minutes into stoppage time.

Huddersfield manager Simon Grayson: "I think over the course of the game it was probably a fair result. We were up against a good team with some good players.

"We competed well, we were a little scrappy at times with possession of the ball, worked hard, put them under pressure, got the goal but you always know you're going to be up against it at times with the players they've got in their squad.

"It was inevitable Jordan was going to get on the end of a chance to score."

Blackburn manager Henning Berg: "I know in a football game, it's not over until the final whistle goes.

"With three seconds to go you still hope to win the game and we would have if we had kept the ball, if we had made the right decisions with the ball in the last minute of the game, we would have come away with the three points.