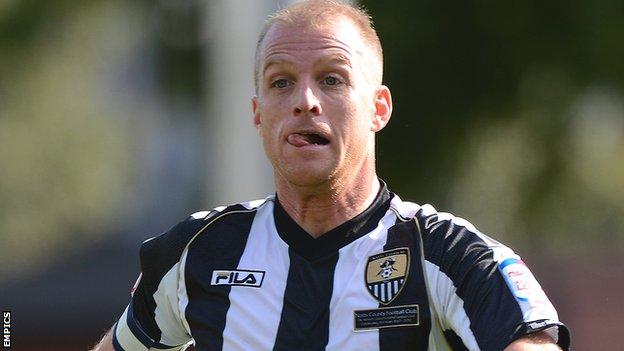 Notts County moved up to fifth in League One with victory at Colchester.

After Colchester's Michael Rose hit the side-netting with a free-kick, Notts took the lead with their first shot on goal courtesy of Neal Bishop's volley.

Marcus Bean fired over for the hosts, while the Magpies' Yoann Arquin forced a finger-tip save from Mark Cousins.

Notts had a 2-0 half-time lead as Alan Judge reacted first to a loose ball in the box, while Ian Henderson went close for the hosts after the break.

Anthony Wordsworth had a couple of chances for Colchester in the second half, while Magnus Okuonghae saw his header hit the top of the crossbar.

The Magpies are now four points behind leaders Sheffield United and second-placed Stevenage, who both have 32 points.

Colchester are 13th with 20 points from 16 matches, six points clear of the relegation zone and seven adrift of the play-offs.

"I thought initially we were on top. We set our stall out to get after them and we did. We attacked them, we got the ball into the box and into good positions.

"But again our old bad habit, that I probably now need to look at changing, set-pieces, giving away free-kicks in stupid areas, have cost us twice.

"That type of goal seems to be happening a lot, I think I maybe need to look at bringing in some competition, I think one or two are getting a bit comfortable.

"I'm very proud in how the players responded in the second half, after Saturday it could have been five or six if we'd capitulated. We didn't capitulate."

"We got the goals at the right time - excellent goals as well - (and) we had a lead we were able to defend, (but) we wanted to go out and still earn the right to play.

"Credit to them, they changed their shape and asked us questions.