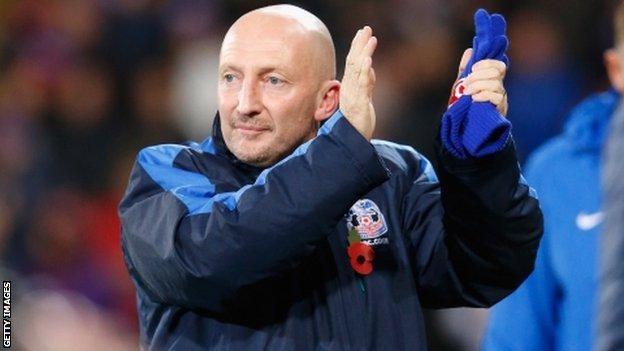 Crystal Palace thrashed bottom side Ipswich to move top of the Championship in Ian Holloway's first game in charge.

Yannick Bolasie chipped in the opener before Wilfried Zaha was tripped and Glenn Murray scored from the spot.

But Murray was not to be denied a hat-trick, converting Joel Ward's centre, before Andre Moritz completed the rout.

It was dream start for Holloway following and succeed Dougie Freedman at Selhurst Park.

The Eagles stretched their unbeaten run to 12 matches and condemned new Ipswich boss Mick McCarthy to a first defeat.

Palace almost took the lead inside a minute when Bolasie found Murray in the area, but the striker fizzed his shot wide.

The home side eventually took the lead on 24 minutes when Bolasie chased Garvan's ball over the top and nipped in to register his first for the club as Ipswich waited in vain for an offside decision against Murray.

Murray saw an effort ruled out for offside, while Palace keeper Julian Speroni tipped the ball to safety after Parr attempted to divert a cross over his own goal.

Zaha was denied by the legs of Henderson but after half-time he was brought down by Luke Chambers, allowing Murray to score his first.

Murray struck again five minutes later after a challenge by Aaron Cresswell, but he could not beat Henderson again from the spot after Chambers fouled Garvan.

The hat-trick arrived - Murray taking his total for the season to 13 - when he finished off Joel Ward's cross.

Substitute Moritz rounded off the win in stoppage time from Jonathan Parr's centre.

"It was a fantastic performance from start to finish and the great thing about this lot is they grind on.

"We want to continue that and if I can keep them enjoying what they've been doing who knows what we can do? The energy around the ground is pretty sensational and I just can't wait to get in with them again.

"Some of things I've seen so far have been sensational. They're professional in their approach to everything and it's almost a 'pinch me, I'm dreaming' situation. But now it's up to me to produce."

"I can't remember a game when a side has conceded three penalties.

"It was a sobering experience but we knew that one victory wouldn't turn the whole season around. We didn't come here with only 10 points and suddenly become a really top team.

"It's been a long five days and I've learned a lot about my team. I know we've got a fair bit of work to do."