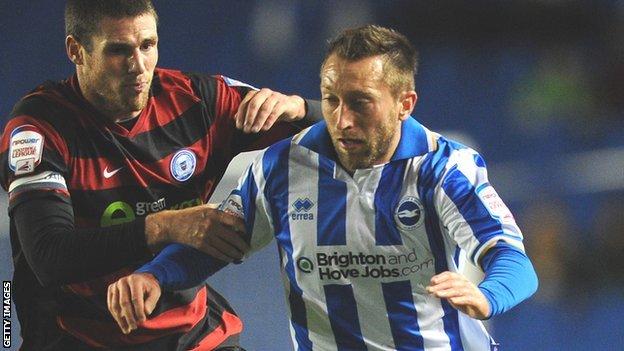 Posh's resolute defensive display looked to have earned the visitors a first draw of the season.

But Dobbie's neat finish two minutes into added time gave Albion a win that lifts them up to eighth in the table.

Peterborough have now lost their last five against Brighton and remain in the bottom three on 12 points.

In the opening exchanges of the match, both sides' recent poor form was evident as their cautious approach led to a lack of chances.

It was the home side who eventually settled into a rhythm and began to create chances but their attacking players failed to capitalise.

Craig Mackail-Smith, who spurned two good opportunities when he headed tamely at Posh keeper Robert Olejnik before flicking the ball wide with another header just before the break.

Gus Poyet's side were livelier in the second half as Will Buckley saw a long-range shot saved before he headed the rebound wide.

Mackail-Smith was given a glorious opening but somehow skewed his shot from 12 yards wide of goal.

The Seagulls' wastefulness looked likely to spare Posh, but then Poyet sent on Dobbie and the move paid dividends as the striker kept his composure to find the net after being found by Ashley Barnes.

Brighton boss Gus Poyet: "I hope this win can be a turning point. It's up to us.

"We have got two difficult away games now [Wolves and Huddersfield] and we must keep believing.

"In the second half it was all about us. We had 32 shots and scored one goal. But the key to it was we didn't concede a goal so we won the game. If you don't concede it gives you the chance of winning."

Peterborough boss Darren Ferguson: "Brighton were a bit relentless in the second half, we didn't keep the ball well enough and unfortunately we lost it at the end.

"We have no time to feel sorry for ourselves and if we play like we have in our last two home games then we will have a good chance against a team that has gone top [Crystal Palace, who they face on Saturday].

"Ian Holloway [Palace manager] has a similar philosophy to me. He likes to get the ball out and pass it and it will be a good game for us."