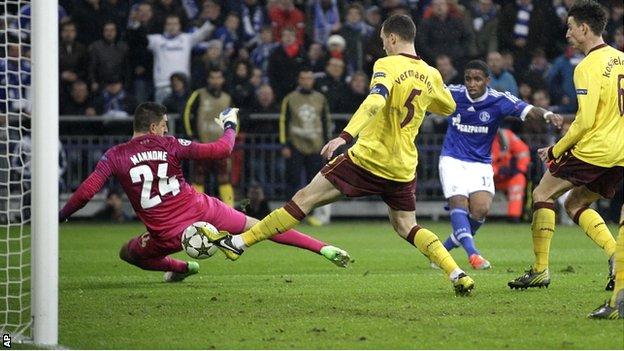 Arsenal surrendered a two-goal lead to draw at German side Schalke 04 and leave their Champions League hopes in the balance with two games remaining.

Making only his fourth start of the season, Theo Walcott tapped the Gunners ahead before Olivier Giroud doubled their advantage with a powerful header.

But Klaas-Jan Huntelaar drilled his side back into contention on the stroke of half-time to shift the momentum.

Jefferson Farfan fired an equaliser as Arsenal held on for a point.

This is only the second time Arsenal have squandered a two-goal lead in the Champions League. The first was against Bayern Munich in December 2000

The Gunners had a glorious late chance to snatch all three, but Walcott was denied by Lars Unnerstall when clean through.

It was a fair result and one Arsenal might have settled for before the match, but they will be disappointed to have let slip a two-goal lead and seen Walcott miss that late chance.

Arsene Wenger's men remain second in Group B on seven points, one adrift of Schalke, but victory for Olympiakos over Montpellier moves them on to six points.

The Gunners, who have won just two of their last six matches in all competitions, host Montpellier on 21 November before travelling to Olympiakos on 4 December.

They will be confident of advancing to the knockout stage, but must improve their defensive solidity if they are to do so.

Wenger's men actually arrived in Germany with more pressing concerns over their attack - they had managed the joint-lowest number of shots on target in the group stage with just 12.

But Walcott was given his first Champions League start since March as part of a three-pronged front line, and the decision paid off.

Arsenal were forced to battle an early bout of pressure as Christian Fuchs saw a shot deflected wide, Ibrahim Afellay drew a fine low save from Vito Mannone and Benedikt Howedes headed over the bar.

Although Wenger dropped the error-prone Andre Santos in favour of Laurent Koscielny and moved Thomas Vermaelen to left-back, his defence still looked shaky in the first 15 minutes.

Yet Schalke's determination to push forward left them vulnerable to counter-attacks, and that duly proved their undoing.

Per Mertesacker's ball upfield was inexplicably headed into the path of Giroud by Roman Neustadter and although the Frenchman hesitated, allowing Howedes to slide in, Walcott arrived to skip past Unnerstall and tap in his 50th goal for the club

The hosts looked stunned by Arsenal's strike against the run of play, and the visitors doubled their advantage when Podolski crossed from the left for an unmarked Giroud to score with a diving header.

Giroud nodded at Unnerstall as Arsenal tried to extend the lead, but they switched off as half-time approached and were punished.

In the second minute of stoppage time, Santi Cazorla lost possession in midfield and Lewis Holtby played Huntelaar in behind Metesacker to drill his finish across Mannone.

The goal lifted Schalke at a critical time and, despite Giroud volleying over the bar when well placed shortly after the break, Huub Stevens' team quickly assumed control.

Jermaine Jones eluded Mertesacker with a pass that put Huntelaar one-on-one with Mannone, but the Italian produced a fine stop with his legs to thwart the Dutchman.

Schalke were now encamped in opposition territory and Marco Hoger's shot was cleared off the line by Mikel Arteta before Mannone saved well from Holtby and Afellay.

The pressure told when Holtby's header from an Afellay cross fell to Farfan at the back post and his drive cannoned in via Vermaelen.

A tiring Arsenal could have won it late on as Walcott escaped Joel Matip, but Unnerstall easily repelled a tame effort with his feet.