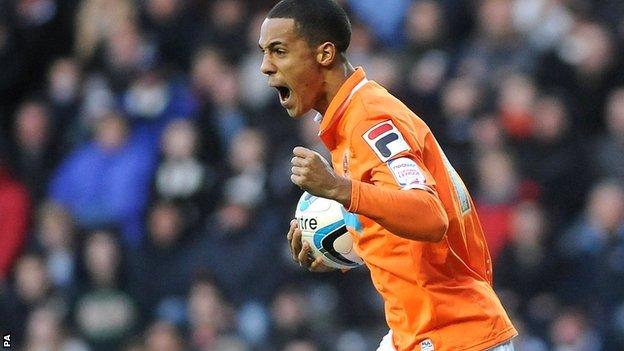 Managerless Blackpool secured their first league win in over a month, pushing hosts Sheffield Wednesday closer to the relegation zone.

Thomas Ince's eighth goal of the season put the Tangerines ahead, the attacker converting from close range after Elliot Grandin's cutback.

The Owls were booed from the field at full-time.

That was a reflection of a match in which the visitors provided most of the game's guile, creativity and vision.

Wednesday's only fruitful moments came in the early stages, a Michail Antonio pull-back too heavy for advancing striker Jay Bothroyd.

That move would prove costly as Blackpool quickly settled, Matt Phillips brushing the crossbar with a fierce 25-yard shot.

In the 18th minute Phillips released Grandin down the left and his cross from the byline was neatly finished by Ince.

The visitors continued to dominate proceedings into the second half, but were only able to double their advantage and seal the win inside the final 10 minutes of the game.

On-loan Aston Villa striker Nathan Delfouneso was introduced and made an almost instant impact, having a run and shot parried by Owls keeper Chris Kirkland, only for Sylvestre to turn the ball into the empty net.

Blackpool supporters chanted the name of interim manager Thompson at full-time, and the former Bolton midfielder can have done his prospects of earning the position on a full-time basis no harm with this result.

Sheffield Wednesday manager Dave Jones: "We had a stonewall penalty again which the referee said [Michail] Antonio went down too easy.

"But I think a pull is not going down too easy. I'm getting fed up now, the referee has to give that. He is five yards away. One day someone is going to give us something."

Blackpool's temporary boss Steve Thompson: "Whoever comes in, whatever role I am taking, I will just give it 100% like I always do at the club. You have got a special bunch in there.

"Whoever does come in, I will support them and I will back them because Blackpool is a special club."