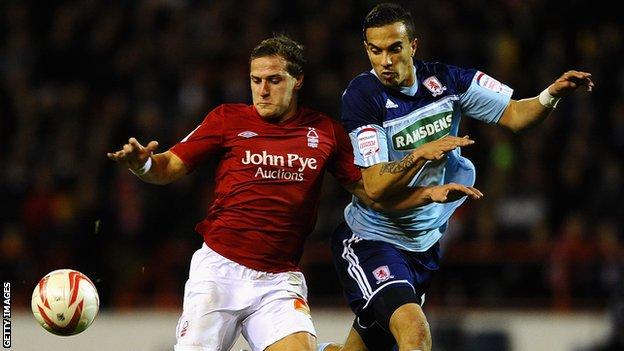 Middlesbrough missed the chance to go top of the Championship as they played out a goalless draw at Nottingham Forest.

Forest had the better chances, with Adlene Guedioura's shot deflected over before Chris Cohen fired wide.

Billy Sharp collected a knock-on from Simon Cox late on, but his shot smashed against the woodwork.

Scott McDonald had the best chance for the visitors, but his effort looped onto the roof of the net.

The draw for Middlesbrough brought to an end a six-game winning run that has moved them up to second in the Championship.

Forest are 11th in the standings, two points outside the play-off places.

Nottingham Forest manager Sean O'Driscoll: "This division is notoriously unpredictable, but Boro have been consistent in their results and their performances.

"They are a good benchmark for us, a side we would like to emulate.

"I suppose on chances created we should have won, but Boro have just won six on the spin. I saw them win at Sunderland (in the Capital One Cup) and they are a very good team.

"They didn't crack. There were times in the first half when I thought we would score, but they kept their composure and you have to give them some credit."

Middlesbrough first-team coach Mark Proctor: "We're delighted. We would have liked to have won the game, but this was our third straight away game and we looked a bit jaded.

"We were playing against a very good Forest team who have some good players. We always knew it would be a tough game for us.

"All in all there were opportunities at either end and a draw was probably the right result."