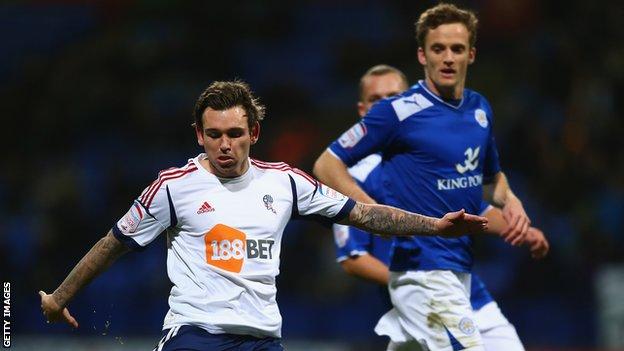 The Hungarian denied good efforts from Leicester's Anthony Knockaert and Martyn Waghorn to secure a point for Dougie Freedman's Bolton side.

Nigel Pearson's Leicester stay in the play-off places with the point, while Bolton are 17th.

Bogdan had to be alert from the outset, keeping out efforts from David Nugent, Danny Drinkwater and Lloyd Dyer before keeping his best save to deny Waghorn's powerful strike.

Despite Leicester's first-half dominance, they almost fell behind just before the break when Schmeichel failed to hold Lee's long-range effort before he reacted quickly to push another strike from the South Korean wide.

However, the visitors continued to have the better chances after the break as Bogdan again denied Waghorn.

The Bolton goalkeeper then superbly kept out Knockaert's effort at the near post to ensure his side took a point.

Bolton manager Dougie Freedman: "It was a great game of football with great moments of attacking play and even better defending.

"I didn't think that they deserved to win the game but they did create plenty of chances.

"Luckily for us though Adam [Bogdan] showed how good of a young goalkeeper he is to get a clean sheet for us."

Leicester assistant manager Craig Shakespeare: "We came for the win, because in the Championship it's important that you keep winning to build on the momentum.

"Everyone in that dressing room is a little disappointed but to pick up a point away from home against a good side is always a plus.

"The experts say when you're on top you've got to take your chances. We didn't do that, partly down to their goalkeeper being in terrific form and they came into the game in that second half."