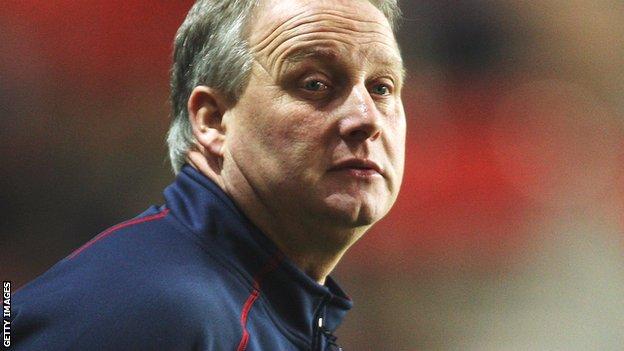 Manager Kevin Blackwell has praised his loan signings for the part they have played in struggling Bury's recent resurgence in League One.

The Shakers failed to win any of their first 13 league matches.

But four points from the last two games against Hartlepool and Walsall have lifted them off the foot of the table.

"Hopefully people realise that when I bring people in, I don't want to sit them on the bench. I bring them in to make us a better team," said Blackwell.

netted a stunning equaliser in the 1-1 draw against Walsall on Saturday - his second goal in four games for the Shakers since joining from Leeds.

Speaking to BBC Radio Manchester, Blackwell continued: "Otherwise, there's no point bringing them in. The loan players really have shone for us.

put in a big shift on Saturday and was very unlucky with a couple of efforts. looks a good full-back because he's solid and he's strong.

"But I have to say I'm also pleased with the lads I've inherited. I've been tough on them and asked questions of them, and at the moment they're responding.

"We've stopped the defeats and now we keep trying to get some wins."

Blackwell hopes to make more additions to his squad during the January transfer window and says progression in the FA Cup is vital to his plans.

Bury host Exeter in the first round of the competition on Saturday.

"The FA Cup is massive to us because we need some money," added the former Sheffield United manager.

"If I'm going to try and make some permanent signings in January, I'm going to need some funds and that's one way we can do it."