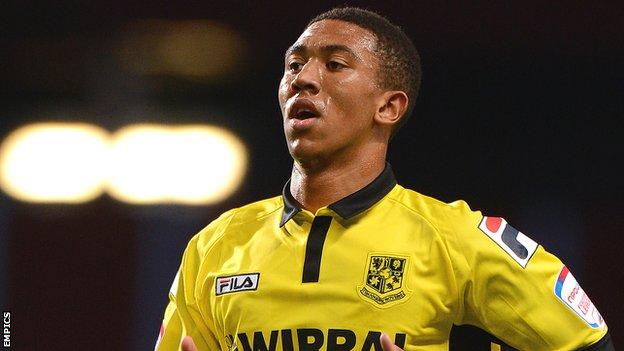 Liam Palmer would be keen to extend his loan spell with Tranmere Rovers.

The 21-year-old midfielder, an ever-present in League One, is on a

He told BBC Radio Merseyside: "The fans have been great. They've been giving me good comments on Twitter so it's been nice."

We lost a couple of games, but even Manchester City and Manchester United get beaten

means the Blades are now level on points with Tranmere, although Rovers are top with a superior goal difference.

Having gone 12 league games unbeaten at the start of the season, Moore's side have not won any of their last three fixtures.

Cassidy's late equaliser on Saturday and helped them avoid a third straight defeat.

"Now we've got ourselves there, it's about keeping ourselves up there in that top one or two and grinding out results if we have to," added Palmer.

"We lost a couple of games, but even Manchester City and Manchester United get beaten. It's about bouncing back and hopefully we can put another run together."

The only thing missing from Palmer's loan spell at Prenton Park is a first goal for the club - something his team-mates are constantly reminding him of.

"They keep giving me digs so I'll have to start shooting more and stop passing," he joked. "Hopefully it will come soon."