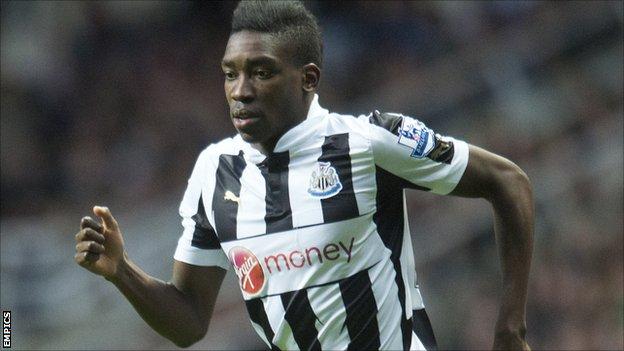 Ameobi, 20, made his 12th top flight outing in Sunday's 2-1 win against West Brom, while it was Pardew who gave him a debut against Chelsea in May 2011.

Sammy is the third Ameobi sibling to have spent time at Newcastle United.

Older brothers Shola, 31, and Tomi, 24, both list the Magpies on their CV, with the former a current team-mate.

Sammy's introduction as a late substitute on his debut against Chelsea in May 2011 marked the first time both he and Shola featured together.

Tomi currently plays for Grindavik in the Icelandic top division after spells with clubs including Leeds, Scunthorpe and Doncaster.

"Alan has brought me through the ranks, so he's got a lot of trust in my ability," Ameobi told BBC Newcastle.

"Hopefully I can come through and show him I'm ready to take on the stage."

The England Under-21 international has mostly featured as an impact substitute at club level, with one first-team start from his 12 appearances.

Sunday's introduction was his first in the Premier League since December 2011, in part due to a hamstring injury last term, and served as a reward for the forward who proved his fitness in the Magpies' Europa League games so far this term.

"It [the Premier League] is a lot tougher, it's a lot faster," Ameobi added.

"That's something I have to get used to, I haven't played a Premier League game in a while.

"I'm looking forward to getting more games and pushing on from there."

Ameobi joined the Newcastle academy ranks in July 2008 from school, progressing from the reserve team to the first-team in three years.