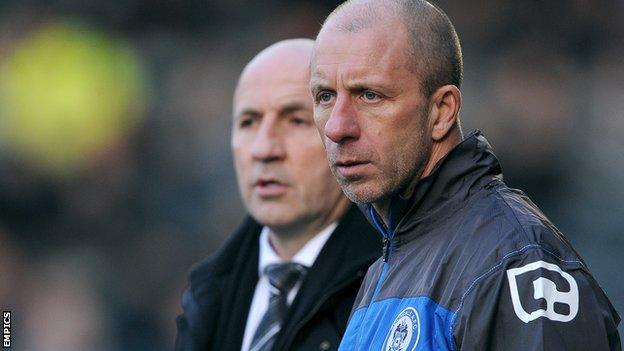 Assistant manager Jimmy Bell says Rochdale want to reach the FA Cup third round, in the hope of being paired with a top Premier League club.

Dale, who last reached round three in the 2004-05 season, face Morecambe in the first round on Saturday.

"It can be a big pay-day in the FA Cup," Bell told BBC Radio Manchester. "You strive to get to that third round and get drawn against a big club.

Rochdale's last appearance in the FA Cup third round was in January 2005 - Dale lost 4-1 at Charlton, then a Premier League club, with Grant Holt scoring their only goal at The Valley

"It will be all systems go against a very good Morecambe team."

Bell continued: "We let ourselves down against them a few weeks ago.

"They were very good on the day and deserved to win, but we're getting there and I think they'll see a very different animal.

"We want to get back over on them and we've got a good record at the Globe Arena, so we'll be fighting all the way to get into the hat for round two."

Goalkeeper Josh Lillis added: "It's always good to play in the Cup and we've got to go there looking to win. We owe them one because they turned us over here. We're looking forward to it.

"You see it every year - there are always teams that make it into the third round and get the big ties. It's great for the club and nice for the fans to have a good run."