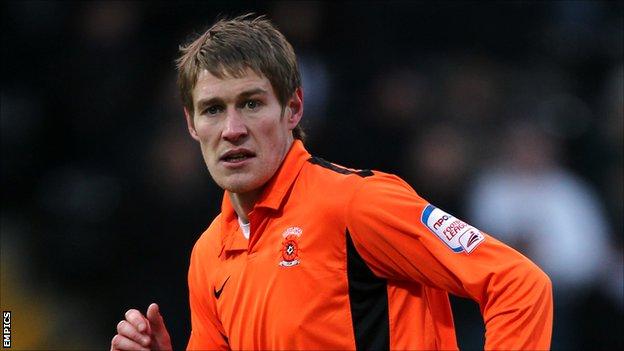 Tony Sweeney has admitted his own lack of form has contributed to Hartlepool United's disappointing run in League One this season.

The 29-year-old, a veteran of more than 400 games for Pools including 17 this season, has been unable to address a run of 13 games without a win.

"I've struggled with form, the team has too, but I've tried everything to rediscover it," Sweeney told BBC Tees.

"I know it will come but the longer it goes the more frustrated you get."

One win all season, against fellow strugglers Scunthorpe United, has seen Pools tumble to the bottom of League One, while a 5-0 defeat by Crewe Alexandra ended their Capital One Cup hopes on the season's opening day.

Neale Cooper handed in his resignation after Pools' defeat by then-bottom club Bury last week, with caretaker boss Micky Barron leading the club to a 2-2 draw at Brentford in the last outing.

However, Saturday's FA Cup first-round tie with Chesterfield of League Two offers the Victoria Park outfit a fresh challenge away from the battle for league points.

"We've seen over the years with cup runs they can get you fired up for the league," Sweeney added,

"If we can get the win we'll take that and try to take confidence and belief into the league games.

"There's still plenty of time to go, we've not been good enough in the first quarter of the season but we've got three-quarters to go and we have to back ourselves to get out of this."