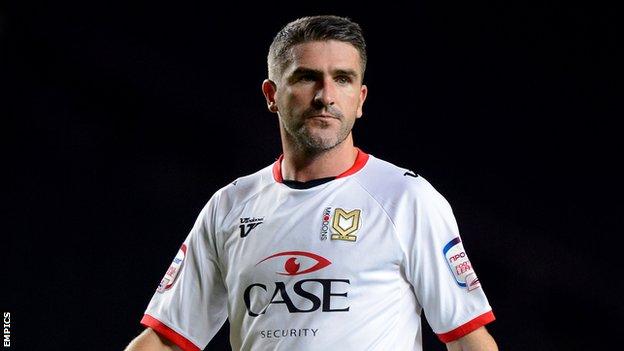 Davis has been seeking extra attacking options, and feels the 34-year-old can help them in the final third.

"I spoke to his agent about a week ago or two ago, and he said he might be available," Davis told BBC Radio Stoke.

He's a talent, and when you've got players like him you've got to secure their futures at the football club.

"But I'm talking about other teams' players and that's unfair so I need to speak to [MK Dons boss] Karl Robinson to see if he's available."

Davis's search for additions was made all the more urgent following news that Ryan Colclough will be out until January with a broken jaw which he picked up in only his second game for the club.

Despite this, the 17-year-old academy graduate has been given a three-year deal at the club, and Davis hopes this will help lift the teenager's spirits whilst he sits on the sidelines.

"It's something that I wanted to do before he broke his jaw, and with him being out now until January, it was even more to do it to give him a bit of a lift," he stated.

"He's a talent, and when you've got players like him you've got to secure their futures at the football club.

"We think he's at the right club - he's had an opportunity very young and deservedly so because of the work he's put in and the improvement he's made."

Meanwhile, Crewe have decided not to extend Andy Bond's loan deal from Colchester, after the midfielder picked up a groin injury.