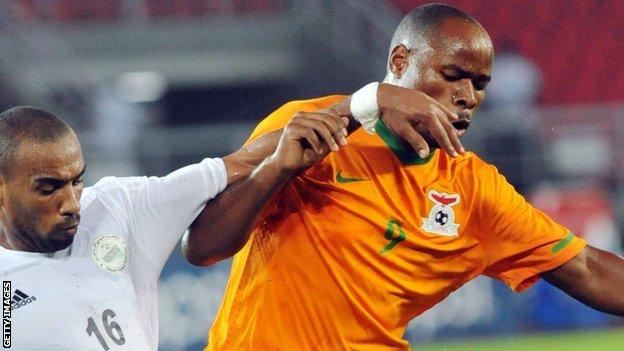 Striker Collins Mbesuma has earned a recall from Zambia and is part of the squad for the friendly against South Africa in Johannesburg on 14 November.

Mbesuma, who plays for South African side Orlando Pirates, was not involved in Zambia's 2013 Nations Cup final-round qualifying victory over Uganda.

Teenagers Mukuka Mulenga and Shadreck Malambo have retained their places in the 24-man squad.

And striker Jacob Mulenga could make his first appearance for a year.

The 28-year-old has not played for the Chipolopolo since he suffered a knee late in 2011, which meant he missed Zambia's victory in the Nations Cup in February.

Coach Herve Renard is likely to hand the Utrecht forward some game time in the Nelson Mandela Challenge match at the FNB Stadium.

But Rainford Kalaba, of Congolese club TOP Mazembe, may not be involved as he has yet to resume training after he suffered a groin injury in an African Champions League game on 6 October.

The match will be Zambia's last before they announce their provisional squad for the Nations Cup, which takes place in South Africa between 19 January and 10 February.

Football Association of Zambia spokesman Erick Mwanza said: "This match provides the Chipolopolo an opportunity to get together and work together.

"In playing these matches, we continue our wonderful development path which is aimed at sustaining and enhancing our high levels of competitiveness.

"Herve Renard is taking this match with the seriousness it deserves and while we are going into it to win it, the main thrust is for the players to enjoy the time together and keep the African winning championship spirit going.

"We are looking forward to the match which is at the venue of the opening and closing ceremonies (of the 2013 Nations Cup) and without taking anything for granted, it's a venue we would like to return to on 10 February next year (for the final)."

Zambia will face Nigeria, Ethiopia and Burkina Faso in Group C of the Nations Cup.