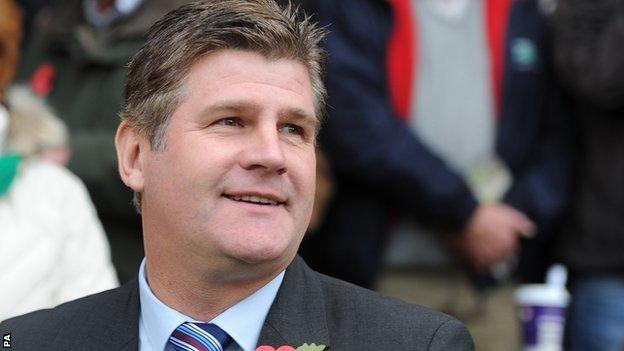 Laws has overseen two promotions during two previous spells in charge of the Iron, who lie 22nd in League One.

"It's not going to be easy because I'll set the bar very, very high," Laws, who replaced Alan Knill on Monday, told BBC Radio Humberside.

"There have been a lot of people feeling sorry for themselves and it's important to give them direction."

Scunthorpe were beaten 3-0 at home by MK Dons in their last game under Knill on Saturday, their fifth defeat in seven matches.

However, Laws, who met the current players and staff for the first time on Tuesday, said he was delighted to be back at the club and hopes to make a positive impact.

"I'm thrilled to bits to be honest, I'm glad to be back and hopefully I can help the club to move forward," he said. "It's been a very tough last few seasons but I'm absolutely delighted and looking forward to the challenge.

"I spoke to [chairman] Steve Wharton at length and obviously the situation they find themselves in is not comfortable, but I've been longing to get back into the game, and the fact Steve asked me to come back and needed help to push the club forward, it wasn't a difficult decision."

Laws confirmed he could have stayed with League of Ireland side Shamrock Rovers, where he was director of football, and had also been talking to Hartlepool United about their managerial vacancy.

"It's crazy isn't it, sometimes you wait for something to happen and all of a sudden I had three things happening," he added.

"But my heart would obviously always be with Scunthorpe, I'm very proud to have been involved in such a great part of the history of the football club.

"Myself, Steve Wharton, Nigel Adkins, have all made a huge contribution in the last decade and what I see at the moment is it falling apart and I want to weld it together."

Adkins took over from Laws as Scunthorpe manager in November 2006 and twice guided them into English football's second tier before taking over at Southampton.

"It's about trying to get the staff, supporters and players all united again and get a smile back on their faces, there've been a lot of people feeling sorry for themselves and it's important to at least give them direction," added Laws.

"If we put everything in place and hopefully the players respond in the right manner, there's only a third of the season gone so we have enough time [to get out of relegation trouble] and let's hope everybody pulls in the right direction."