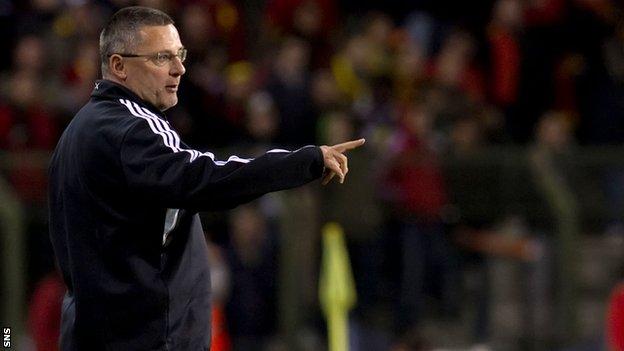 Craig Levein's future as Scotland manager is set to be confirmed in the coming days.

With the national team's hopes of playing in Brazil in 2014 all but over, will Levein be given the remainder of the World Cup qualifying campaign and beyond to restore some national pride?

Or will he pay the price with his job for recent poor results which see Scotland prop up Group A?

The manager can only work with the players at his disposal. A hard-working and committed group they may be, but the current Scotland squad has no talismanic figure that other nations of a similar standing can boast.

Wales have the explosive talent of Gareth Bale, Denmark's Christian Eriksen has been lighting up the Champions League and Robbie Keane, with more than fifty international goals, has been pivotal to Ireland's recent successes.

Levein and his predecessors have lacked a player who can win a game almost single-handedly. With the pool he has to choose from, it's difficult to envisage a new manager making sweeping personnel changes and affecting an instant turnaround in results.

Continuity and long-term development will be central to Levein's case for defence when he meets with the Scottish Football Association board. It's no secret that the Scotland players enjoy working with the manager, and with performance director Mark Wotte publicly backing him, the close-knit relationship within the national team set-up could be compromised if Levein is dismissed.

Are expectations too high? Belgium, France and to a lesser extent Germany, endured a barren spell on the international stage. But after sustained investment and a long-term performance plan, all three countries have developed quality teams.

It will take time for Levein and Wotte's plans to come to fruition. It may be painful to witness Scotland's failings at the moment, but given time and support, Levein may yet be the man to guide Scotland to France in 2016.

Facts and figures. Scotland lie bottom of their World Cup qualifying group. They have two points from a possible 12 and have scored twice in four games. The campaign hasn't reached the halfway point and already it's nigh on impossible that Scotland will feature in Rio or Sao Paolo.

Scotland could go into their remaining six games with a new manager, a fresh outlook and with time to regroup and prepare for qualification for the European Championship in four years' time.

Key decisions have turned large sections of the Tartan Army against Levein. By fielding a team without a recognised striker in the Czech Republic two years ago, he disillusioned large swathes of the travelling contingent who questioned the manager's tactical knowhow.

Add to that his failure to settle his differences with Steven Fletcher long before his reintroduction - the striker spent two years in the international wilderness - and it has led to many observers claiming Levein has put his own stubbornness and ruthless decision-making before the needs of the team.

There are few signs of progress, despite Levein's repeated claims that the team is heading in the right direction.

Had Scotland been going down with a brave fight or showing glimpses of brightness the outlook may be different, but the team have looked limp, staid and devoid of ideas in recent games. Thus supporters are becoming increasingly uninspired by the thought of following a Scotland side under the former Dundee United manager.

What do you think? Should the SFA stick by their manager or signal a fresh start with a new man in charge for the upcoming friendly in Luxembourg? Leave your comments below.