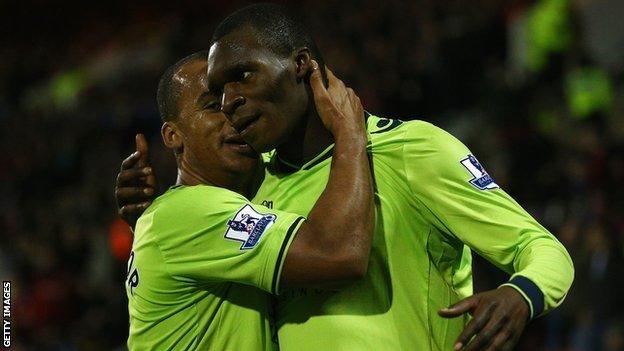 Aston Villa manager Paul Lambert praised Christian Benteke after his winner against Swindon, but was unhappy with the striker's overall performance.

Benteke struck late to secure a 3-2 Capital One Cup win against the Robins.

"Benteke has had a quality start [at Villa] but his game wasn't up to my standards," said Lambert.

"His two goals were world-class finishes but you set yourself a standard and we've got to keep him up to that standard."

"We looked like the Premier League side and they looked like, with all respect to Aston Villa, the League One side."

Belgium forward Benteke, who was signed from Genk in August for a fee of around £7m, opened the scoring at the County Ground and a Gabriel Agbonlahor strike put Premier League side Villa 2-0 up against their League One hosts.

But two goals from Miles Storey levelled the match before Benteke struck the decisive goal after 90 minutes.

"Why did he fall short? I don't know," added Lambert.

"But he has been brilliant since he came here and I think he will get better. He is only 21 and has been a pleasure to work with.

"He is going to be a big player and plays in a brilliant Belgium team."

Swindon boss Paolo Di Canio believes his side were the better team but paid the price for the quality of their finishing not being as good as their Premier League opponents.

"We did our best and I am very proud because we dominated the game," said the Italian.

"In the first half possession was 60-40 in our advantage, in my opinion, because we played football and they countered only.

"The way we played, I'm more than proud because we dominated not like a typical cup game between a League One side against a Premier League side where the emphasis is on energy and physical presence.

"We dominated by playing football. That makes me very happy as a manager. It was a fantastic achievement from my players.

"Talking about the game we looked like the Premier League side and they looked like, with all respect to Aston Villa, the League One side.

"Benteke had two clear chances and scored two goals. We had 10-12 and only scored twice. Anyway, we have to accept this result."