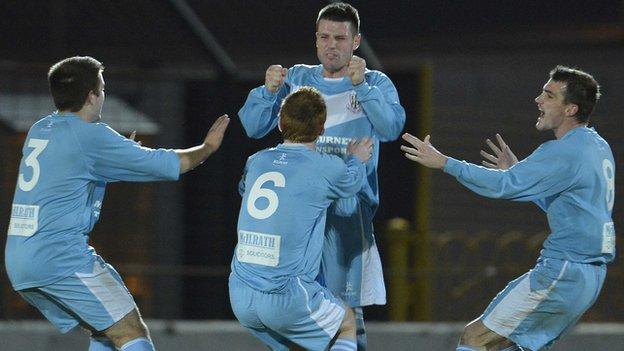 Ballymena struck twice in the second half to defeat Donegal Celtic and go through to the Co Antrim Shield final.

The visitors had the better first-half chances with Shane Dolan and Eamon Hughes missing out with headers.

Alan Davidson fired low into the bottom corner for a 62nd minute opener after good work from David Cushley.

Gary Thompson blasted in six minutes later to set up United's first final appearance since 2006 on 27 November against Linfield.

The Blues defeated Crusaders 1-0 at Seaview in the other semi-final on Tuesday night.

Donegal Celtic shaded the first half but United almost took the lead just before the break when keeper John Donnelly kept out Jamie Davidson's deflected cross.