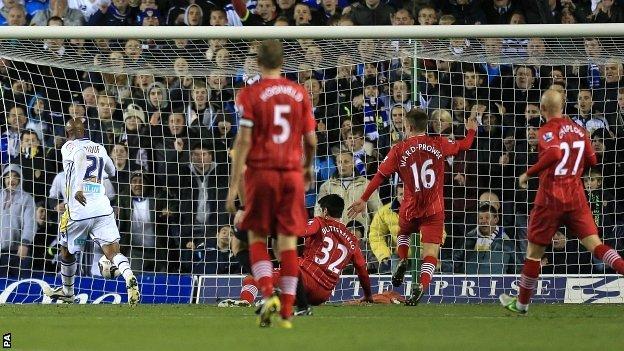 Southampton manager Nigel Adkins took responsibility for his team's Capital One Cup defeat by Leeds after naming a completely changed side.

The 3-0 loss at Elland Road, courtesy of goals by Michael Tonge, El-Hadji Diouf and Luciano Becchio, came after the Saints lost to Tottenham on Sunday.

"Forty-eight hours ago we had a high-intensity game and I made the relevant changes. I take full responsibility."

Adkins added: "We wanted to play on Wednesday, but the powers that be wanted it to be on Tuesday.

The last time Saints were a Premier League side, during the 2004-05 campaign, they were also knocked out by a Championship side - Watford.

"We gave the players who have not been in the team the chance to show what they could do, and they did not take it."

Southampton have now lost three consecutive matches and do not play again in the Premier League until they face West Brom on Monday.

They have won just once in the league this season and sit second from bottom in the table.

"We use the second day as a recovery day and I didn't want to risk injury as we have a few as it is," Adkins said. "But when someone puts on the shirt for Southampton Football Club you expect them to perform at the highest level."

Adkins insists he is still the right man for the job, but admitted questions would be asked of his future at the club.

"Some players had the opportunity to show why they haven't been in the team and maybe some of them let themselves down."

"I don't want to go anywhere. I love the club, I love being at Southampton football club," Adkins told BBC Radio Solent.

"But ultimately questions will be asked and I will front it all up as I always do. There needs to be stability but you can't keep losing games of football."

However, Adkins paid tribute to under-21 midfielder Lloyd Isgrove, who came on as a second-half substitute.

"Everyone has to be accountable for tonight," he said. "[But] Lloyd Isgrove was superb when he came on tonight, he's done more in that half hour to affect the game than several other players.

"We have a good group of players in the football club and some players had the opportunity to show why they haven't been in the team and maybe some of them let themselves down."

Leeds reached the last eight of the League Cup for the first time since 1996 and boss Neil Warnock paid tribute to Luke Varney, despite the striker missing an open goal.

"We were up for it tonight - we played some good football and I was delighted that we sustained that," he told BBC Sport.

"We played poorly in the last couple of games and didn't really enjoy either of them but you could see we were enjoying it tonight and I couldn't fault anybody.

"Luke Varney was superb, to say that he came off his sick bed, he did really well. Apart from his miss of the century I thought he was excellent."