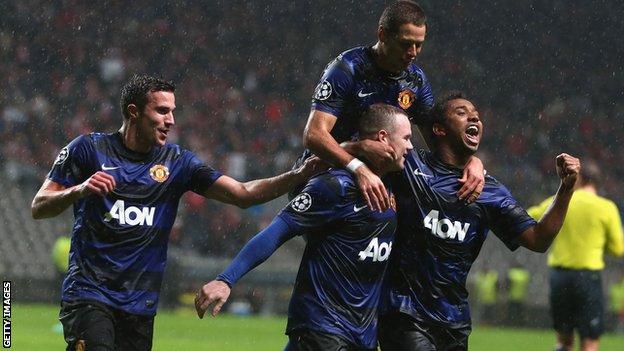 Manchester United fought back to defeat Braga and reach the last 16 of the Champions League as Group H winners.

Alan put Braga ahead early in the second half with a powerful penalty.

A power cut just before the hour resulted in floodlight failure, before play resumed after a 12-minute delay.

Substitute Robin van Persie then fired over a stranded Beto before Wayne Rooney despatched a penalty into the top corner and Javier Hernandez stabbed in a stoppage-time third.

The win in Portugal, United's fourth in as many European games, means they top the group with 12 points, eight ahead of Galatasaray with two games remaining.

That is in stark contrast to their performance in the Champions League last season, when they failed to progress beyond the group stage for only the third time in 17 years.

Just as he did in the reverse fixture at Old Trafford last month, Sir Alex Ferguson opted to reshuffle his defence, giving Chris Smalling his first start since suffering a metatarsal injury in pre-season alongside Jonny Evans at centre-back.

United went 2-0 down before fighting back to win 3-2 last time, and once again Braga immediately looked to find gaps in the visitors' backline.

First, Eder took advantage of Evans's hesitancy to nip in and flash the ball across the face of goal but, fortunately for United, no Braga player was waiting in the box, before Ruben Micael sent a long-range effort just wide after he was afforded space outside the area.

Braga were denied by the woodwork in the 22nd minute as Hugo Viana delivered a cross into the area that Eder dived to meet, but the Portugal international could only watch on as his header bounced back off the post.

United, meanwhile, were seemingly in no rush to search for an opening, and their only effort of note in a forgettable first half was Evans's harmless looping header from Antonio Valencia's cross, which was easily collected by Braga keeper Beto.

The visitors' hopes of confirming their place in the last 16 was dealt a blow when they fell behind four minutes into the second half.

Custodio's run into the box was stopped by Evans and referee Felix Brych pointed to the penalty spot. Alan stepped up to confidently put the ball high into the net for his third goal against United in this year's competition.

United attempted to respond three minutes later as Nani's shot was deflected wide, before Danny Welbeck was adjudged to have handled the ball inside the area, with the striker in a promising position.

Despite those half-chances, United were still looking distinctly off key and were given a chance to regroup just before the hour when suddenly half of the stadium was plunged into darkness due to floodlight failure.

The players returned to their respective dressing rooms as the problem was looked into, giving Ferguson an impromptu chance for a team talk, before power was restored and play was able to continue.

United re-emerged with Rio Ferdinand taking the place of Evans as Ferguson looked to improve his side's defending, before Van Persie was also introduced in the 64th minute and it was the Dutch international who levelled matters 10 minutes from time.

Ryan Giggs played a long ball for Van Persie to chase and the striker spotted Beto inexplicably racing off his line. He took full advantage, curling an effort above the Braga keeper's grasp and into the net.

A point was all United needed to progress, but they took the lead in the 85th minute when Rooney was brought down inside the box by Nuno Coelho and, after a brief delay, the referee pointed to the spot, with Rooney picking himself up to smash the ball into the top corner.

There was just time for Ferguson's side to put a gloss on the scoreline when Rooney fed a pass across the area to Hernandez, who rounded Beto before stabbing the ball through the legs of a defender on the line and into the net.