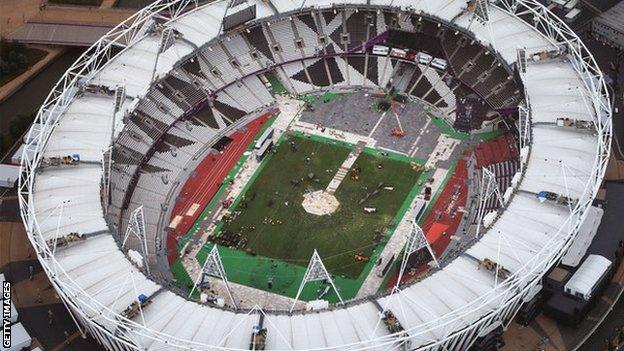 Johnson, chairman of the London Legacy Development Corporation - which runs the stadium, met officials from the National Football League (NFL).

A decision on the tenants from four bidders, which does not include the NFL, is not expected before December.

"The talks were exploratory, we are at an early stage, but the signs are encouraging," said a spokesman.

No NFL games could take place at the Olympic Stadium until 2017 at the earliest as an exclusive five-year deal has been signed with Wembley Stadium.

Discussions about the long-term possibility of hosting matches have previously been held with other venues, including Murrayfield in Edinburgh and Cardiff's Millennium Stadium.

Four bids have been submitted to use the Olympic Stadium, which is due to reopen in 2014. These are from football clubs West Ham and Leyton Orient, Intelligent Transport Services in association with Formula One, and UCFB College of Football Business.

It is thought talks about the NFL staging games at the venue, first reported in the Daily Telegraph, are not at an advanced stage and any deal may need the agreement of the successful bidder.

The New England Patriots beat St Louis Rams 45-7 on Sunday at Wembley in the sixth year that London has hosted an NFL regular season game.

The mayor's spokesman said: "Sunday's game at Wembley, in front of over 80,000 fans, further cements London's reputation as the natural home of American Football outside of the United States.

"Only last week the mayor in conjunction with the NFL, announced an expansion from one to two regular season matches in London from 2013. That means in total an additional £44m in revenue for the capital from next year.

"Given the ever-growing popularity of gridiron on this side of the Atlantic, the mayor and his team have held a number of meetings with senior executives in the last few days to explore further opportunities involving the NFL and London."

NFL in the UK

Two matches will be held at Wembley next year - the Minnesota Vikings against the Pittsburgh Steelers on 29 September, with the Jacksonville Jaguars playing the San Francisco 49ers on 27 October.

Jacksonville will also play a 'home' match there in each of the following three seasons.

David Tossell, director of public affairs for NFL International, said: "We continue to have a number of conversations with the mayor's office over a number of issues relating to our presence in the UK as we have done over the last five years."

A decision on the successful Olympic Stadium bidder, which had been expected in October, is not now likely before December as the schemes continue to be evaluated.

Whichever bid wins, the venue could have multiple uses and the stadium will host the World Athletics Championships in 2017.