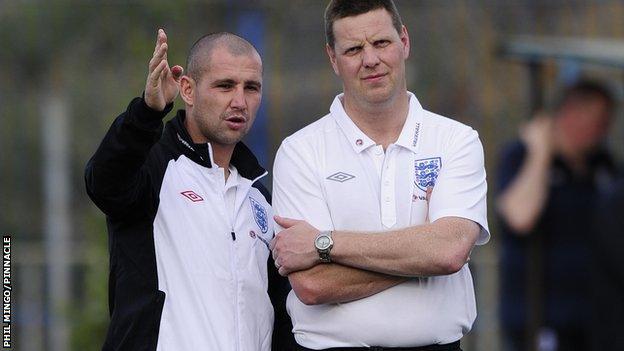 Jersey boss Craig Culkin believes his squad can expect one of their hardest matches ever when they face a Republic of Ireland amateur side on Saturday.

The top players from the island's league will wear the Three Lions of England for the first time in the international friendly in Dublin.

The game is part of preparations for the Uefa Regions Cup in San Marino.

Jersey won the right to represent England at the tournament by

"I think we've got a blend of youth and experience," said Culkin.

"It's just now getting across that white line, hopefully going to do the job we've prepared to do, and that's win arguably one of our toughest games of all time."

Culkin has also confirmed the island's Muratti skipper Stuart Andre will wear the captain's armband for the match at Home Farm FC.

It will be his final appearance for a Jersey side before he goes travelling.

"There's a big world out there for Stuart to see," said Culkin.

"This is fitting for what I believe is one of Jersey's most loyal and finest players.

"I think it's going to be a proud day for him and his family.

"Stuart's desperate to win as the captain of the island and the country."

The England starting line-up is expected to be named on Saturday just 90 minutes before kick off.