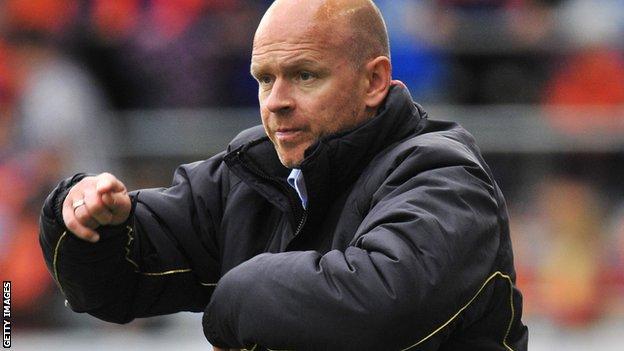 The 43-year-old, who has six years of managerial experience in his native Norway, has agreed a three-year deal at Ewood Park.

His appointment ends the search for a successor to Steve Kean, who resigned in September after 21 months in charge.

Berg played almost 300 games in two spells as a Rovers player and was part of the squad that won the Premier League under Kenny Dalglish in 1995.

The Norwegian takes charge with Rovers fifth in the Championship.

Blackburn have waited more than a month to appoint a replacement for Kean, who

The Championship side asked to speak with former Rovers players - currently the technical co-ordinator at Tottenham - and about the position, but both approaches were rejected.

And on Tuesday, following speculation he was planning talks with the club.

Berg, who was sacked by Lillestrom last October, made a big impression during discussions with Rovers earlier this week and has been handed his first managerial role in English football.

As a player, he was a key part of the Blackburn team that pipped Manchester United to the Premier League title 17 years ago and, in his second stint with the Lancashire side, captained them to League Cup success in 2002.

Berg won two further titles during three years at Old Trafford, including the treble in 1999 when they also won the FA Cup and Champions League.

He is one of only three Norwegians to reach 100 caps for his country.

After his departure from Lillestrom, the former Rangers centre-back had been working as a television pundit in Norway.

Blackburn have taken nine points from six matches under caretaker manager Eric Black, who admitted after that he was unsure if he would remain in charge for this weekend's trip to managerless Crystal Palace.

"I've no idea, but it's been the same for four weeks," Black told BBC Radio Lancashire. "I'm just delighted with the response I've had from the players. They've been fantastic.

"The Wolves game [Black's only defeat] was one that disappointed everybody, but we had three away draws which I don't think were a disaster and two home wins.

"The players have shown that they're capable of getting us out of this division. I've enjoyed some parts of it and not enjoyed others, but I've enjoyed working with the players and I'll continue to work with them until I'm told not to."