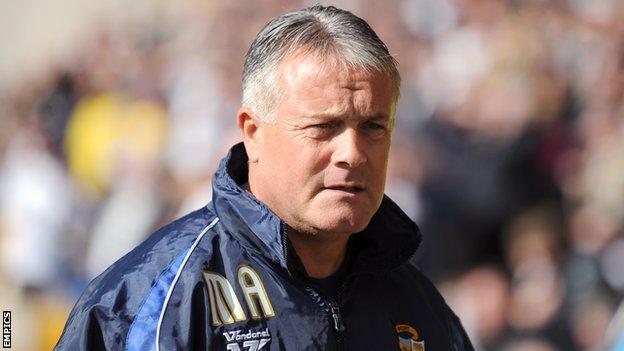 Adams feels the use of predominately part-time match officials in League Two is having a major impact on matches.

"I'm not sure fitness levels [of lower league officials] are as good as they should be," Adams told BBC Radio Stoke.

"The players are fitter than they ever have been - maybe the advent of full-time refs must come down to the lower leagues sooner rather than later."

Last campaign, just 12 League Two matches were handled by full-time officials, while the rest were overseen by part-time referees.

On Saturday, part-time referee Richard Clark took charge of Vale's defeat by Northampton in a game which saw defender John McCombe sent off for a tackle which broke Cobblers striker Alex Nicholls' leg.

And the 50-year-old was unsure whether Clark should have been officiating the game, especially after he turned down Vale's claim for a penalty when Ashley Vincent was felled by Joe Widdowson in the box.

"Looking at some of the incidents on Saturday, the referee wasn't in the ideal position to award correct decisions on a number of occasions so I would have to question his fitness," said Adams.

The Professional Game Match Officials (PGMO), the association for referees, have a fitness protocol for all National List (Level One) officials which includes those who oversee Football League matches.

Each official is required to download training data on a weekly basis and submit this to a sports scientist who will give them a personalised programme.

The fitness test for Level One officials is in line with Fifa guidelines and involves a series of sprints and endurance tests, as well as a measure of body fat.