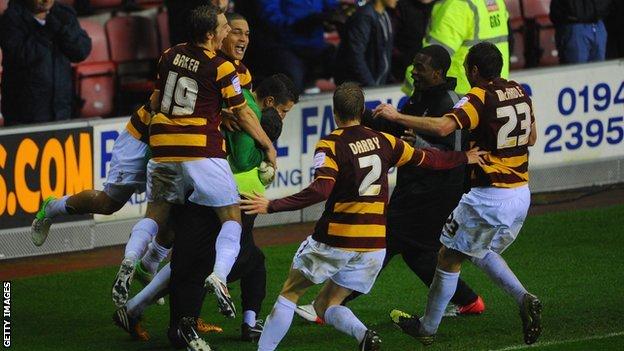 Bradford City boss Phil Parkinson praised his side's discipline after their penalty shoot-out victory over Wigan Athletic in the Capital One Cup.

The Bantams won 4-2 on penalties after holding their Premier League opponents to a 0-0 draw.

"I thought the discipline of the team tonight was totally top drawer," he told BBC Radio Leeds.

"Everyone just stuck to their jobs and as the game went on we just got better and better."

Victory over the Latics means that the League Two side have now won their last seven penalty shoot-outs in all competitions.

Bradford had been the lowest ranked side going in to the fourth round and, after Swindon's exit, they will be the only team outside the top two divisions in the quarter-finals.

Parkinson is hopeful that Wednesday's draw will see his side pitted against another Premier League side.

"We'll wait with great anticipation for the draw because we can't really get a bad tie," he added.

"The club needs the additional revenue and it would be brilliant to pick out one of the big boys, home or away.

"I can feel the momentum building in the city behind the club and we want to keep that there."