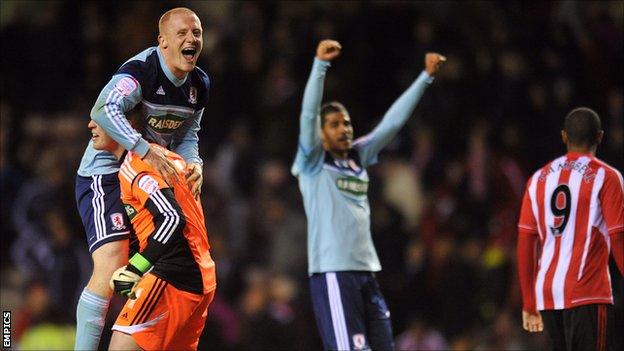 Martin O'Neill has said Sunderland's inability to handle the intensity of a Wear-Tees derby against Middlesbrough caused their Capital One Cup exit.

The Wearsiders to end their interest in the competition at the last 16 stage.

"We didn't start the game in a no-confidence mood, but we finished that way," O'Neill told BBC Newcastle.

"Tonight in terms of the emotion of the occasion, we didn't do well enough."

O'Neill's side have scored only six goals in the Premier League this season, five of which were scored by striker Steven Fletcher.

The Capital One Cup had proved more fruitful - with three goals for winger James McClean and one for midfielder Craig Gardner.

However two goals in the last five games, including three blanks, have seen the Wearsiders lose their unbeaten record in the league and exit from the cup amid a four-game winless run.

"That's what makes fine players, those who choose the right option under adversity, in their minds the players should be able to pick the right choice."

Sunderland's second derby in as many home games - - failed to produce the same last-minute heroics.

Ba's late own-goal handed the Black Cats a point against the Magpies, but O'Neill's side toiled to no avail for an equaliser against Boro.

"I've said to you before, it's misguided, but when it's continually misguided that's when the frustration starts to blind you.

"People have come here with an expectation from us and we've failed to deliver."