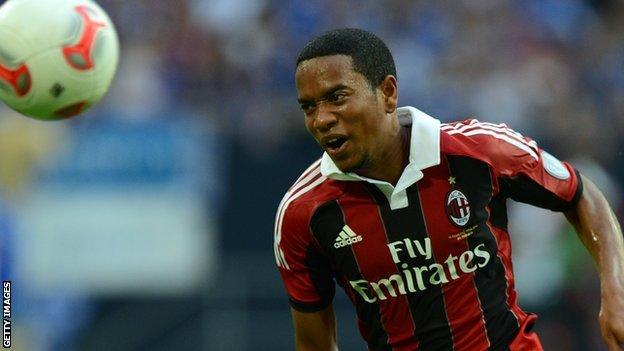 They lost a clutch of their biggest names in the summer, no longer have the finances to compete with Europe's richest clubs and made their worst start to a Serie A season for 71 years - this is a new era for AC Milan and it did not begin too brightly.

After five defeats in their first eight league games, life has got a little easier for Milan's manager Massimiliano Allegri with Saturday's thumping 5-1 win over Chievo Verona lifting his side to 10th in the table.

But Allegri is still facing constant speculation over his future and badly needs to follow Saturday's domestic victory by winning Tuesday's key Champions League group game against a Malaga side who are running away with Group B.

He is not the only one under pressure. As well as Allegri, it has been tough going for the players who survived the enforced Rossoneri revolution at the cash-strapped club.

They were left huge shoes to fill, having not just lost long-standing team-mates, but also club icons, leaders, characters and friends.

"It was like starting over again," Milan's Dutch international winger Urby Emanuelson told BBC Sport. "A lot of legends left us - some players who had played 10 or 15 years at the club - so of course it was difficult.

"And then when Zlatan Ibrahimovic and Thiago Silva left, obviously that had a huge impact on our team."

It is not all doom and gloom in the dressing room, though. Far from it.

Emanuelson was close to some of those to depart but says he felt ready to step up to replace them and help ensure the 'New Milan' can prosper like their predecessors did.

The 26-year-old former Ajax star, who was a close friend of Liverpool striker Luis Suarez when they were together at the Amsterdam club, played his part in the tail end of that success.

Emanuelson joined the Italian giants in January 2011 and played a part in securing their last two trophies - the 2011 Scudetto and Italian Super Cup - as well as helping them finish second in Serie A last season, the last act of the 'old Milan'.

When he returned for pre-season training at the start of July, he quickly found out how much things had changed.

Veterans like Clarence Seedorf, Filippo Inzaghi, Alessandro Nesta, Gennaro Gattuso and Mark van Bommel had already departed. Within days, Ibrahimovic and Silva had been sold to Paris St Germain too.

Milan's current fragile finances meant they could not spend huge amounts on new players, although the likes of Nigel de Jong, Giampaolo Pazzini and Riccardo Montolivo were brought in as part of the rebuilding process.

Nonetheless, the changes in personnel left an opportunity for the likes of 20-year-old defender Mattia De Sciglio and young forward Stephan El Shaarawy to establish themselves as regulars in Allegri's starting line-up.

Emanuelson has also grabbed his chance with both hands. Having been moved over to the right wing in Milan's 3-4-3 or 4-3-3 formation this season, he got off the mark with his first goal of the campaign against Chievo - a fizzing strike from the edge of the area.

Largely used as a substitute in his early days at the San Siro, he feels he has matured both as a player and a person in the last few months.

"The players who left were very, very important to me - people like Seedorf, Van Bommel and Ibrahimovic," Emanuelson explained.

"They helped me a lot in my first year here when it was difficult because I had more of a feeling that I was all by myself.

"It was difficult. I had played for Ajax for 17 years and everything in Milan was new - it was my first time out of Holland in a new city, new club, new people and new food.

"I knew I had to move to become a better player and Clarence helped me a lot from the beginning. I knew him already because our families know each other and, when I came to Milan, he was more like my big brother.

"He was watching out for me and very friendly, but also hard on me when he felt I had to do things better. I think it helped me a lot that those kind of players were around me when I was new here.

"But seeing them leave didn't affect me personally at all because it is my second year now at Milan and they prepared me a lot - I have got used to the club now, I know how things work over here and I feel very good about it all.

Life with Luis - Urby on his friendship with Luis Suarez

"We are still in touch and we still talk over the phone. I had a great connection with Luis at Ajax - on the pitch I helped him as much as I could and off it we were close friends. Sometimes when he wanted to go out with his girlfriend, my mum would babysit for him.

"I know Luis gets criticised sometimes but I think he is misunderstood - he is a fighter who wants to win his games, and he is a dangerous attacker - defenders will do anything to stop him.

"Over the last few weeks I have read a couple of things about him that coaches say he is always falling and that kind of thing but I know him better. In England he has also shown he is a great player."

"I know we are in a difficult moment but I feel I can be important for the team and I just want to help them.

"I feel that people are expecting more from me now. I want to show I can make Milan better. That is the part that makes me a better player than when I was at Ajax. I have a lot more confidence now."

Emanuelson has belief in Allegri too, and says the criticism his manager received over his tactics and results has brought a positive reaction out of his squad.

Results have improved, with a win over Genoa followed by a fight back from 2-0 down to draw 2-2 with Palermo - and that thumping victory over Chievo on Saturday.

"He is dealing with it in a good way," Emanuelson said. "He is very calm, he works with us every day very hard and the criticism makes us stronger because we are one group and we are together.

"It's normal that journalists attempt to get us down but it just makes us stronger. We are growing, we feel like we are growing and we know we have to do it with each other - from our trainer to the players and the assistant coach to the physios, everybody is sticking together."

He feels there are better times ahead for the club's fans too, admitting Tuesday's game with Malaga is "must-win" but adding he is confident Milan can recover from their uncertain start in the Champions League to reach the knockout stage.

"There are two sides to our current situation," Emanuelson added. "Of course we feel the pressure from supporters to do better. People still expect things from Milan because this is a great club with a great history. I think we are the biggest club in Italy.

"But this feels like an adventure. It is like a new goal - we are building a new team. We have to work really hard but I am not afraid of what lies in front of us.

"It is the sort of thing that has to happen at every club at some time. Every club, once in a while, has to refresh the team and this year it is Milan.

"I am looking forward to the adventure. The squad is much, much younger than it was but the feeling in the group is good. Hopefully we can start to win prizes again soon."