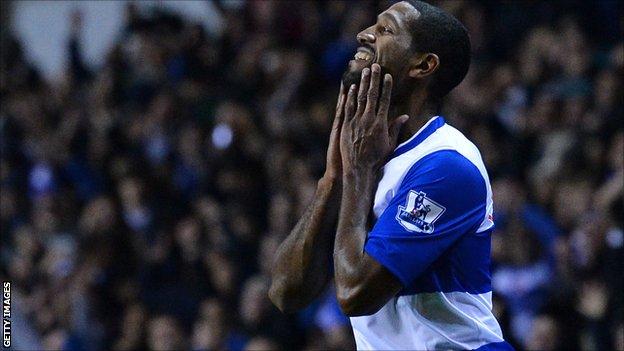 Reading midfielder Mikele Leigertwood has likened Tuesday's incredible 7-5 defeat by Arsenal to the type of games he played at school.

The Royals led 4-0 in the League Cup last-16 tie, but collapsed to 4-4 after 90 minutes before Arsenal progressed to the quarter-finals in extra-time.

"I've not been involved in a game like that since I was a schoolboy," Leigertwood told BBC Radio Berkshire.

"It was disappointing to say the least."

Into the history books

Leigertwood scored Reading's third goal but despite leading 4-1 at half-time they could not hold onto the lead with Theo Walcott equalising in injury-time.

Marouane Chamakh scored in extra-time before Pavel Pogrebnyak levelled, but Walcott and Chamakh had the final word.

"To score five goals and not win a game is very hard to take," he added.

"We've got no-one to blame but ourselves."

Reading, who are without a win in the Premier League this season, travel to fellow strugglers QPR at the weekend, and Leigertwood says they must now recover from Tuesday's devastating defeat.

"We've all got to take a look at ourselves individually," he said.

"We have to analyse it and put it right. It's going to be a test to bounce back but there is no reason why we can't go and get a positive result against QPR at the weekend.

"I don't know what to say, it was one of those freak games that happens every so often," he said.

"It just seems to be happening to us a lot. We need to figure out what we can do about it.

"Conceding the late goal sums us up at the minute, it's hard to take but we'll bounce back, and we need to concentrate on the league now."