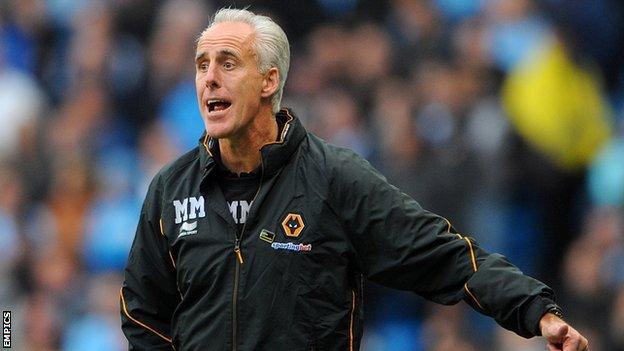 Ipswich Town have appointed former Wolves and Republic of Ireland boss Mick McCarthy as their new manager on a contract until 2015.

The 53-year-old, who has also managed Millwall and Sunderland, was sacked as Wolves boss in February.

He will be assisted by his former number two at Wolves, Terry Connor, who succeeded him as manager at Molineux.

McCarthy replaces Paul Jewell, with the club bottom of the Championship table.

Mick McCarthy has managed all his three clubs (Millwall, Sunderland and Wolves) to the First Division/Championship play-offs and led the latter two up to the Premier League as champions

Jewell's assistant Chris Hutchings, who took charge of Saturday's 3-0 loss to Sheffield Wednesday - Town's fourth straight loss and 12th game without a win - has left the cub by mutual consent.

"I'm obviously delighted to have been given the job as Ipswich Town manager and I'm looking forward to the challenge ahead," McCarthy told the club website.

"It's a fantastic football club, with a proud tradition and history and a terrific fanbase. While the long term ambition is to take the club back into the Premier League, it's clear that the first priority is to get some confidence back into the team and start climbing the table."

His first game as Town boss will be the Championship match at Birmingham City on Saturday.

Marcus StewartFormer Ipswich striker, who played for McCarthy at Sunderland

"He will get respect instantly. He talks to you in the right manner and tone. You want to play for him straight away.

"What you see is what you get. He's fair and honest.

"I'm sure it's the right decision to appoint him.

"He's got fantastic experience. In the Championship he's got Wolves and Sunderland promoted.

"Over the course of the season they will improve under him and improve even further next season."

After five and a half years as Wolves manager, Barnsley-born following a run of one win in 13.

The former Manchester City and Celtic defender started his managerial career at Millwall and, after four years at the Den, he left to take the Ireland job in 1996.

McCarthy, a Republic international during his playing career, led the national side to the second round of the 2002 World Cup finals, but was embroiled in a public dispute with then midfielder and former Town boss Roy Keane.

He has led all of the three clubs he has managed to the Championship play-offs and won promotion as champions with Sunderland and Wolves.

Connor, McCarthy's assistant at Wolves, replaced him at the helm but following the club's relegation to the Championship reverted to the role of assistant when Norwegian Stale Solbakken arrived in the close season.

The 49-year-old, who joined the Molineux coaching staff in 1999, was sacked in September.

"We are under no illusions of the challenge ahead for this club given our position in the table but we feel we have the right manager to lead that challenge.

"Mick has a wealth of knowledge in the game and has shown that he knows how to compete successfully in the Championship in his time at both Sunderland and Wolves.

"While the first task is to guide the club away from our current position, we believe Mick has all the credentials and drive to eventually bring success back to Ipswich Town."

McCarthy will be unveiled to the media at a news conference at Portman Road at 17:00 GMT.

Alan Curbishley, who counts Charlton and West Ham as his former clubs, and ex-Newcastle manager Alan Shearer had also been linked with the role.