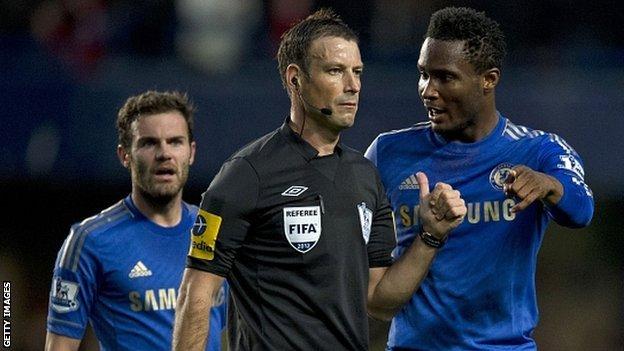 Police and the FA are investigating Chelsea's allegation that Clattenburg used inappropriate language, including racial words, towards two players.

"I see no reason for not recording the conversations," Palios told BBC 5 live.

"If we had the recordings we would have the answer to [whether Chelsea's claims are true]."

Palios believes broadcasting the dialogue between players and referees in a manner similar to rugby union would benefit the FA's "Respect" campaign by highlighting the abuse officials have to put up with.

"You could say people would become party to the language that goes on on the field, but it then creates a burning platform," said former Tranmere and Crewe midfielder Palios.

"The FA should follow this through and use the moment to enliven their Respect campaign and make it real.

"At the moment, Respect is an abstract term that is signified by a fading notice on the back of a park dressing-room door.

"There are very few things where there is a silver bullet but showing guys a yellow card every time there is dissent for a referee are silver bullets you could apply."

At major rugby union matches, fans have the option to buy "Ref Link" earpieces in order to hear the conversations between players and officials, which are also audible to TV viewers.

As a result, players rarely swear at officials, and can be punished by a 10-yard penalty or a yellow card if they do.

"Not only do you record these things, you put them on a ref link so that the crowd, including the children and the sponsors, can hear what's said," Moore told 5 live.

"There would be carnage for about six weeks and then it would be sorted. But the problem is this: when you speak to people in football a lot of them say 'you can't do that'.

"The fact is you can do it, there's no technical reason or moral reason. It's just that they are afraid that people will hear just how bad it is."

Referees' union Prospect said they would not be making any changes or recommendations regarding the recording or broadcasting of officials' microphones until the current investigations are complete.

The Press Association reported that Clattenburg denies the allegations, while the Professional Game Match Officials Board said the referee "welcomes the opportunity for the facts to be established".

Chelsea's internal investigation into Sunday's events, headed up by an external legal counsel, is expected to be completed on Wednesday. They will then announce whether they wish to make a formal complaint about Clattenburg to the FA.

Chelsea's initial complaint was made after the game to the match delegate, who reported it to the FA.