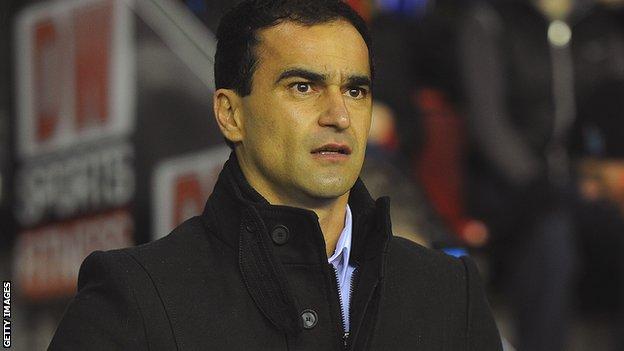 The Latics hammered and to reach round four but were beaten on penalties by the Bantams after a goalless 120 minutes.

"We had two very tough games and we scored eight goals in those games," Martinez told BBC Radio Manchester.

"You would never have said that if you saw the amount of chances that we had and couldn't convert."

The Spaniard added: "You have to congratulate Bradford and we wish them well in the next round."

Wigan, League Cup finalists in 2006, were unable to break through a disciplined Bradford defence during normal time and then an extra 30 minutes at the DW Stadium.

Shaun Maloney and Jordi Gomez failed with their efforts from 12 yards to confirm Wigan's exit.

Martinez made nine changes to the team that beat West Ham in the Premier League on Saturday, with only goalkeeper Ali Al-Habsi and defender Ivan Ramis retaining their starting places.

"Certain players haven't been playing in the league and they wanted the opportunity so much that they took the extra responsibility and they couldn't enjoy themselves," he added.

"We need competition for places. You know players for what they do on a daily basis and what they do in games, not just one game.

"It's important that every time you're on the pitch, you're as good as you can be and you need to fight for your position. That's how football works.

"I was very pleased with some individual performances, especially some of the youngsters to come and take that role of having to control a game.

"But obviously in football, you have to win football games and we have to learn from it. We will become a better squad after this because of the disappointment of being out of the cup."