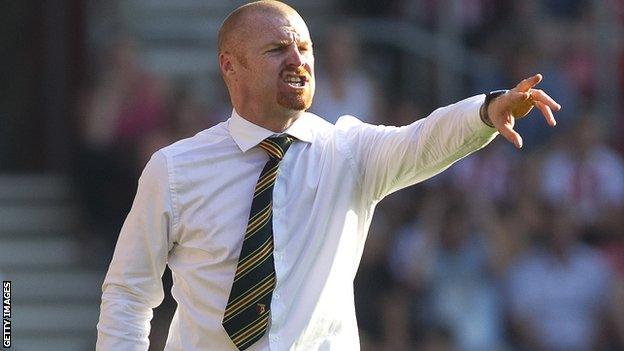 New Burnley manager Sean Dyche has said he will build on the work done by Eddie Howe to push the Clarets into the Championship promotion race.

with Burnley 14th in the table.

Dyche told BBC Radio Lancashire: "We want to be flexible in our thinking. There are some good things here.

"The team are scoring freely but unfortunately not doing so well defensively. It's more about adding to, not taking away, to take us forward."

Co-chairmen John Banaszkiewicz and Mike Garlick said Dyche was the "outstanding candidate" to take over from Howe, who left the club on 12 October to

Burnley have the worst defensive record in the division, having conceded 29 goals in 13 league matches.

But they do possess the leading scorer in the country, Charlie Austin, who has netted 18 times already this season.

Dyche continued: "I don't think there will radical change.

"There will be a change in culture for sure, which we will bring in gradually, but we've given them an immediate feel of that and what we think is appropriate to move the club forward because that's my aim."

If a club like Burnley phone you, you take it seriously

Dyche is back in management four months after he was having taken the Hornets to their highest Championship finish for four seasons, and replaced by former Chelsea striker Gianfranco Zola.

And he dismissed suggestions that he needed time to think about taking up the role.

"If a club like Burnley phone you, you take it seriously," said Dyche, who won 17 of his 49 games as manager at Vicarage Road.

"It's a fantastic club and when I got the good news, the decision was immediate. People were suggesting I went home to think about it, but absolutely not."

Dyche has signed a contract until the summer of 2015 and will take charge of the Clarets for the first time against Wolves on Saturday.