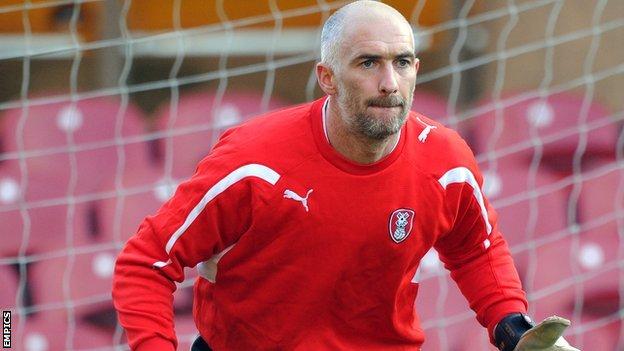 Rotherham goalkeeper Andy Warrington has acknowledged that the side have been boosted by the return of boss Steve Evans to the touchline.

The Millers have won three games in a row since the end of Evans's six-match stadium ban.

"It definitely has had an impact and I think the gaffer found it hard not being there," the 36-year-old told BBC Radio Sheffield.

"There's nothing like having your manager on the touchline every week."

He added: "I think he's really happy that he's back and able to do his job to the best of his ability."

The pre-season promotion favourites won just two of the six games Evans was forced to miss but three successive victories have lifted them to within four points of third-placed Cheltenham, with a game in hand.

Warrington, who has come back into the side for the last three matches after an injury to first choice Scott Shearer, believes the Millers are well equipped to go back up to League One for the first time since being relegated in 2006/07.

"I've been here for six years now and this is by far the strongest squad we've had," he continued.

"The competition for places now is so demanding that it means players with the shirt have to keep working hard to make sure they retain it because there are some good players not even getting in the squad."